For those who prefer their superheroes served up with a dark side – and their nasty avengers tinged with a dash of morals – Jumper playfully toys more than a little with that unconventional premise, while delivering high voltage screen action. Based on the 1992 sci-fi novel by Stephen Gould and helmed by Bourne Identity and Swingers director Doug Liman, Jumper swings into a different kind of action less about power plays hitting on women – though there is plenty of that too – than a reality-transcending travel through space rather than time, dubbed teleporting.

Hayden Christensen is David, the Jumper in question, a shy, nerdy Michigan high schooler from a troubled family who suddenly finds himself quite by chance, a mixed-blessing accidental tourist embarking to just about anywhere on earth on a mere whim, as he discovers to both his delight and dismay. Abandoned by his mother (Diane Lane) when he was just five and stuck at home with a moody, alcoholic dad (Michael Rooker), David has been escaping emotionally from his miserable situation into romantic daydreams about his classmate, Millie (Rachel Bilson). 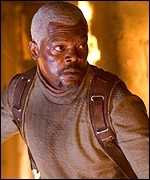 But when he gets up the nerve to present her with a gift one day that a bully rival grabs and tosses onto a frozen lake, David makes an ill-advised impulsive decision to go retrieve it, and falls through the ice. As David struggles to survive this life-threatening crisis, his teleporting superpowers kick in, to his utter surprise, and catapult him into the local library, ice water and all.

David slowly gets it that he possesses the awesome power to hit multiple destinations around the planet in seconds and walk through walls – even if he leaves all sorts of gaping holes and wrecked plaster behind him. The both stunned and elated, suddenly self-emancipated high schooler is soon slipping through bank vault doors and amassing a fortune, which he uses to fund jaunts around the planet sightseeing and seducing women.

And while the authorities are simply baffled, a covert Jumper-exterminating organization, the Paladins, catches his scent and is on the hunt to exterminate this out-of-control kid tampering with nature, subverting the social system, and messing up the environment by ripping dangerous holes in the ozone layer to slip through and, well, party hard. Samuel Jackson, doing super-mean and ready to rumble as head Paladin Roland, is gunning for David and on his heels every airborne step of the way, and wielding a really scary super-sized zapping taser prod.

Far from your typical futuristic action adventure, with mumbling monosyllabic warriors, flashy, monotonous battle scenes and generic personalities, Jumper has all of that and lots more. Hayden’s emotionally torn and morally flawed character defies not just the constraints of space and gravity, but predictability as well. As such, there’s plenty of intrigue when it comes to behavior and clash of personalities as well as clashes of enemies in battle. Though Jackson’s malicious avenger is far too mysterious and lacking in fully explained motivations, a plot flaw that is likely to be cleared up in the sequel that of course threatens to hit theaters in the very near future.