It’s apparently no more Mister Nice Guy for Samuel Jackson. Moving on from his kinder and gentler personas to the pretty scary, frequently airborne sci-fi assassin Roland in Doug Liman’s Jumper, Jackson dumps the light saber routine for a high-voltage super-taser gun that does a lot more than just make enemy jumper Hayden Christensen’s hair stand on end. But more than an opportunity to do battle once again with Hayden after getting smacked around a little in Star Wars, Jackson described his lifelong obsession with action comics during this conversation, that drew him into the movie. He also talked about no big deal getting a bus thrown at him in the film or being tossed on to a remote cliff possibly somewhere in the vicinity of Bin Laden, and the mystique of his crown of white hair that was all his idea, thank you. And of course, globetrotting golf dates being at the top of his wish list, if and when he ever got those teleportations powers in real life. 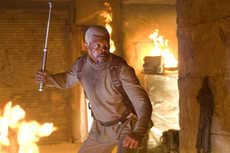 They’ve got a picture of your Jumper character Roland now, in Vibe.

Now, Jumper is about humans getting tempted into extreme behavior, when they find out they have a superpower. Do you feel you could be trusted with a superpower like that?

What would you do with a superpower?

SJ: Oh, probably just jump around from golf course to golf course! And I’d go to all these places that…take too long to get to!

SJ: One of my favorite places is South Africa. But it takes so long to fly there. So it would be great to flash up, and just jump up to…a golf course there!

You wouldn’t be concerned that the other golfers would think only God should have that power, which is what your character Roland complains about in Jumper?

SJ: Well, other golfers probably think only golfers should have the power to make every hole!

Okay, how come you sport snow white hair for this movie?

Why did they bring it up to you?

But it’s just a look, in a comic book sense. I read comics lots of the time, and I’ve been reading comics since I was a kid. And most characters in comics have a very distinct look.

I think Roland is sorta ageless, in a way. You don’t really know how old he is, but that hair gives him a sense of gravitas. You know, he has white hair, but he’s very virile and strong. He wears his hair like a crown, and he leads his people. That’s all. No big deal…

You mention you’re into comics. What are you reading right now?

SJ: What am I reading now…Testament. Which is a comic book interpretation of the bible. And Black Summer. Which is superheroes kinda taking over the US.

And, The Boys. They’re these guys who are anti-superheroes. And they think that when superheroes fight bad guys, the residual damage is way too much. So they want to get rid of all the superheroes.

Now about your character and his motivations. He’s a kinda end-justifies-the-means guy, who does some bad stuff in order to do good.

Oh, killing a couple of people, including a cop and a dad…

SJ: Hey, he didn’t necessarily kill him. You didn’t get to see if he woke up or not later! I did kill the dad, though. But he was in the way! But, it’s kinda hard to say.

I know Roland’s a principled guy. There is a gray area, in terms of whether he is bad or good. You have no idea. And these jumpers are also interesting characters. My character seems to think that all of them eventually go bad.

But I’m not sure what it means. We do know that Hayden’s character jumps and has fun. And Jamie Bell’s character Griffin is psychotic and paranoid, and living alone in his cave. And he’s a jumper engaged in this war.

And that jumping leaves rips in the atmosphere. Which could be environmentally dangerous. We don’t know yet. So I could be a person who works for a government agency. Or even Greenpeace!

Do you think people will see the robbing of banks in this movie by a jumper, as a victimless crime and not a bad thing to do? Because it’s stealing from a big bank that’s insured, not from old ladies.

SJ: Yeah, of course. Don’t we all think that? So yeah, sure. You know, he’s just seventeen years old. So kids are gonna think that’s kinda cool. They’re just gonna be like, that’s so cool.

What about that bus that gets thrown at you? Even though that didn’t really happen.

SJ: Of course my agent wouldn’t let them throw a bus at me!

And that was a really scary super-taser gun you were zapping the other characters with.

SJ: I got one of those at home. You can taser people with it. Yeah, it’s kinda cool!

I can see you’re not somebody to tangle with! And it’s a bit more terrifying than your light saber.

SJ: Kinda hard to conceal, though! And they’ve got that Sam Jackson stuff in that museum now, with all my weapons there!

Is there a method to your choice of movies at all?

So are you going to sing in your next movie, Soul Men?

SJ: You’re like a lawyer, you ask questions you know the answer to! Am I planning to sing in that film…I always plan to sing when my character is supposed to sing. Now, what comes out of my mouth, may not be singing!

But yeah, Bernie Mac and I sing. The premise is that we’re backup singers in a group called Marcus Hook And The Real Deal. Then we become a big solo act. But we just have one hit.

So Bernie opens up these car washes. And I start robbing banks, and go to prison. Then we end up at the Apollo, just after I get out of prison.

What’s the weirdest thing that’s happened to you lately?

SJ: I just met with some guys who want me to write a comic book about myself. Now that’s weird!

Will you go for it?

SJ: Maybe so. We’ll see what happens. I don’t know. How’s that! I don’t even know why I told you that. I shouldn’t have told you that!

Is fame a bizarre thing to wrap your head around?

SJ: Nah. We all hope we have some kinda legacy. Or that we do something that means something to the world in some sorta way. And for me it’s like okay, I’ve entertained a lot of people, and that’s great.

But I think it’s pretty amazing that I’ve done some things that people can hold on to. You know, you can go through your whole career and people might not even remember one part you’ve played, or one line you ever uttered.

But people tend to like the things I do, and they remember them. So…I get the Pulp Fiction quote eight times a week! You know, somebody from somewhere, yelling it at me.

Or, “Get the motherf***ing snakes off the plane!” So, there’s always something. And it’s kinda cool that I’ve done that. And I’ve been a part of some pretty epic films, like Star Wars.

So, that’s that. And if other things do come to pass, like me being a virtual actor that they use in an animated film, well cool. You know? That’s great.

Do you have a favorite line that you’ve ever uttered?

SJ: If I had to choose one, it would be, “May the force be with you.” Because I remember hearing it for the first time and going, whoa! And when I got to see it, it was like, wow…

The 20th anniversary of School Days is coming up. Do you remember anything about that?

Can you remember everything you were in?

SJ: Yeah, pretty much. Don’t you? Some things more vividly than others, but yeah.

Now, getting back to Jumper, what about the clash of generations and some pretty bad parents in the movie?

SJ: Really? You’ve got the strangest angle on this movie! Clash of generations. Okay…I hadn’t thought about that.

Speaking of which, you get to beat up some younger guys.

SJ: Yeah. I haven’t given that much thought either. Parentally, it is an interesting film. And I’m sure there’s a story in there that we’re gonna get to. In other words, Doug didn’t explain that all to me!

You kinda get dumped at the end, left on some cliff somewhere. Where was that?

SJ: I don’t know, probably in Taliban country somewhere. You know, someplace where they can’t find whoever they’re looking for out there. Like wow, who’s that in this cave? Mr. Bin Laden! We’ve been looking for you. What’s up?

So then I guess your character is coming back for the next Jumper.

SJ: Well, I’m angry, and I got some history. And I ain’t dead, I gotta come back!