Flaunting bad behavior in a film, whether by the characters or director, is not necessarily a wrong move. Unless, that is, it’s derangement for derangement’s sake.

Such is the case with the drenched in gin drama, Julia, in which Tilda Swinton masterfully pours much more than her heart into her drunken and dissipated damsel in distress performance. And while the audience is unfortunately left to languish without a clue, as to how she ended up that way and who she may actually be when sober. 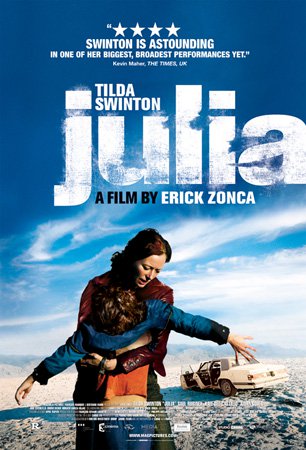 Like far too many recent movies, including British director Joe Wright’s The Soloist, Julia is also a cultural outsider’s take on this country which may be fixated on a US society and sensibility that exists mostly inside the moviemaker’s head. Written and directed by French filmmaker Erick Zonca, best known for The Dreamlife of Angels, Julia might just as well have been titled, The Dreamlife Of Erick Zonca. Tilda Swinton is the perpetually inebriated protagonist in this rather untimely story of convoluted bottom feeder financial ripoffs and rampant greed by a host of morally deficient have-nots, at a moment in history when the planet has been plunged into

economic misery by the corporate and banking elites.

When Julia is befriended by a clearly bonkers Mexican immigrant neighbor Elena (Kate Del Castillo), who pressures her into a kidnapping plot in exchange for a tidy sum in order to retrieve her son Tom (Adan Gould), being held by her rich boyfriend’s family, the intoxicated bimbo can’t see past the dollar signs. But she’s got a sinister sidebar scheme of her own, to engage in a secondary kidnapping and barter the rich kid in exchange for two million dollars in ransom.

The particular pleasure of experiencing this movie, is in watching Swinton do smashed, sassy and super-mean for the duration. But her journey, such as it may be, which includes fleeing across the Mexican border while being mistaken for an illegal by the INS patrol in pursuit, is a little like sharing the primarily pointless ride and her drunken stupor as well, with the dazed dragon lady. Though there are perversely comical moments, as Julia attempts to pull off various criminal acts like a pro, while barely lucid in her tipsy state. Kind of like those Buster Keatonesque bank robbers you hear about every once in a while, who take ill advised time out in the heat of a heist, to answer their cell phones.

What we never learn about this much too hastily redeemed, morally challenged anti-heroine, is how or why she became so distastefully dysfunctional in the first place, or if the kidnapped boy even had any connection to the crazed Elena. Though Tom seems to learn quite a bit more about Julia than we do, and in a really repugnant way – Too Much Information Alert – as the preteen actor ends up sharing the morning after bed with his entirely too naked, degenerate illegal guardian, following another in a series of her one night stand binges.