NewsBlaze News
Home Entertainment Movie Reviews Jennifer Lopez Plays It Tough and Down and Dirty, on The Mexican... 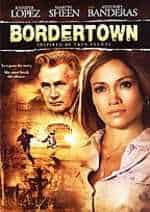 Written and directed by Gregory Nava (El Norte, Frida, Selena), Bordertown is a devastating, emotionally charged fact-based drama touching on the rapes, murders and disappearances of thousands of Mexican women factory workers in the multinational maquiladores factories lining the border between Mexico and the United States. The virtual labor camp fortresses that sprung up in the 1990s in the wake of NAFTA (North American Free Trade Agreement) economically thrive off the absence of tariffs and humane working conditions.

Juarez in particular, where the film takes place, is home to nearly a thousand of these maquiladores, as explained in a prologue to Bordertown. And with the enormity of these unsolved and virtually uninvestigated horrific crimes against women in this desolate desert terrain, are ongoing charges of cover-ups and complicity of government and business interests, to prevent interference or interruption of the business boom there.

Jennifer Lopez is Lauren Adrian in Bordertown, a Chicago investigative reporter for a big city paper who is sent off reluctantly to Juarez by her editor, George Morgan (Martin Sheen) to cover the deaths and disappearances of the women there. The hard bitten, ambitious journalist is prodded to agree to the assignment, only after being offered the carrot stick of a big promotion in return. When she arrives in Juarez, it’s made clear that Lauren is far more interested in fame and glory for her work, than the plight of these exploited, oppressed and victimized female factory workers. Feeling a little lost and ill equipped, Lauren latches on to a hardly enthused reporter colleague Alfonso Diaz (Antonio Banderas), a now married former lover she apparently used and abandoned in the past, just to further her own career.

Alfonso, who now manages his own newspaper in Juarez, has been running stories about the murders, much to the irritation of the local authorities who frequently harass him and confiscate his papers. By chance, the pair encounters a young indigenous Indian woman Eva (Maya Zapata), a factory worker from the countryside, who was viciously beaten, raped and buried in the desert, but managed to escape alive. While Lauren initially uses both Eva and Alfonso to get her story, even risking their lives in the process, she eventually comes to care deeply for the terrified young woman, through a process that includes confronting discomfort and denial about her own racial roots, and joining the female workers on the grueling assembly line to feel their pain. Their fierce female bonding that evolves through shared empathy and tragedy, strikes a blow to both a virtually institutionalized male culture of violence there and the male dominated social and economic authority and media in their midst.

Jennifer Lopez immerses herself in her character with such passion and intensity that clearly resonates, not just as identification with Latina sisters south of the border, but as an immense love and concern for the humanity and plight of global sisterhood at risk. At the same time, the film takes her character into harrowing, difficult places, exploring the complexities of racial understanding, identity, shame, self-hatred and ultimate healing.

Jennifer Lopez was awarded the Artists for Amnesty Award by Amnesty International for Bordertown, which she also produced. Present at the Amnesty ceremony this year at the Berlin Film Festival, was Norma Andrade, whose seventeen-year-old daughter was found murdered in Juarez in February 2001. Andrade has since co-founded Our Daughters Back Home (Nuestras Hijas de Regreso a Casa), a legal support group for the parents of these young victims.

“She’s a remarkable woman and a true inspiration,” said Lopez of Andrade at the ceremony, describing her an incredible source of strength for many women there. A special acclaim is in order for Jennifer Lopez as well for Bordertown, for courageously taking drama to the highest level not just in the moment, but in the world.