It sounds rare indeed, for an outrageously insane horror comedy to not only derive its creepy inspiration from your own obsessive boyhood cinematic close encounters with Freddy Krueger, but to actually get that iconic madman to star in your movie too. But that’s exactly how Jon Knautz’s Jack Brooks: Monster Slayer came to be. This Slamdance smash hit combines gory, gritty and bold, edgy lunacy with a somehow affectionate subversion of the classic horror genre, miraculously fusing the scary and ridiculous.

Trevor Matthews is Jack Brooks, a hotheaded young plumber who’s aware of his uncontrollable rage that leads him to violently attack people who aggravate him, but is helpless to deal with it. Including stuff like breaking a bottle over his own head when he’s so furious that he can’t open it. Even sessions with an anger management shrink offer little hope, and only lead to further frustration.

It seems that when he was a boy, Jack’s entire family was brutally slaughtered and devoured before his eyes while dancing to Bobby Darin on a camping trip, by a famished monster known as The Forest Troll. Having never really confronted his trauma, Jack now does toilet repair duty by day, and night classes studying chemistry. His kindly teacher, Professor Crowley (Nightmare On Elm Street’s Robert Englund) invites him over to his spooky house in the woods one ominous evening, to fix his rusty clogged water pipes. But there’s a strange curse that haunts this hovel, and tampering with the plumbing apparently unleashes an eating disorder demon cousin of The Forest Troll. Needless to say, steam pipes have never seemed quite so scary. 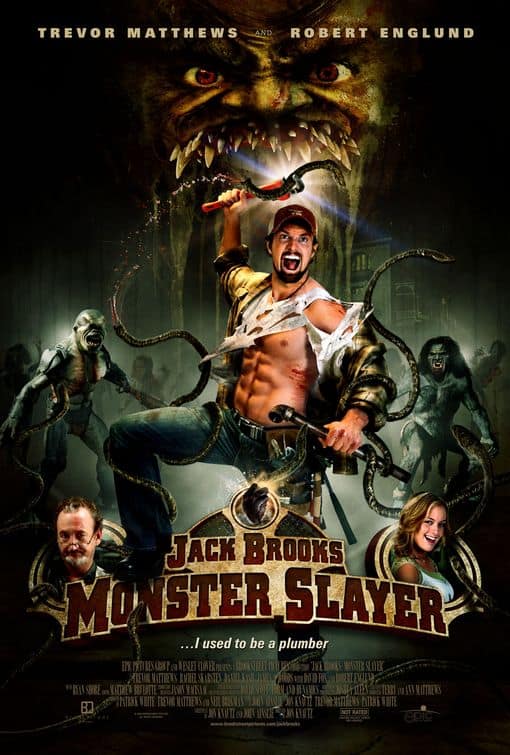 And it takes the clueless students in his class lots more time to realize that something is not quite right with Crowley, than it does to figure out their chemistry assignments. Even though the disheveled and blood-stained professor with a sudden ferocious appetite, has taken to munching on raw chicken legs in class and barfing on the blackboard.

There are hints that Crowley swallowing the still ticking heart of the long dead creature entombed under his front lawn, may have more than a little to do with this sinister state of affairs. But it’s much too late for speculation as Crowley’s inner monster is outed, and starts snacking on every student in sight. Jack manages to escape the premises, but changes his mind and returns as a kind of action hero Plumberman, as soon as Bobby Darin starts crooning on his car radio.

This never-a-dull-moment monster masquerade is a refreshing switch from that hi-tech digitalized blockbuster freakout fare, because all those old fashioned homespun terror tactics rule here, however cheesy. But it’s Robert Englund who unquestionably, and nearly wordlessly, steals this show, whether steamed up from that bad plumbing, dealing with all sorts of strange complications associated with male pregnancy, or weirdly delighting as the reluctant glutton just plain eating your heart out.