With media junkies hooked right now on disgraced New York Luv Guv Eliot Spitzer’s comedown – no puns intended and there are many more to come in this review, so pay attention – and little focus from the service provider’s perspective, so to speak, the movie Irina Palm may go a long way to change all that. Scarcely scandal-free, former Mick Jagger favorite honey, singing sensation in her own right, and occasional suicidal homeless heroin addict Marianne Faithfull turns the hooker with a heart of gold notion on its head along with well, giving is better than receiving issues, which are all in for a radical makeover in this film.

Marianne is Maggie in Irina Palm, a frumpy, aging suburban London widow and lifelong housewife who endured a loveless marriage through the decades after finding herself pregnant at seventeen. And now she’s suddenly saddled with the burden of her young grandson afflicted with a potentially terminal disease, and having to help find the money to pay for a possible life-saving operation in another country. 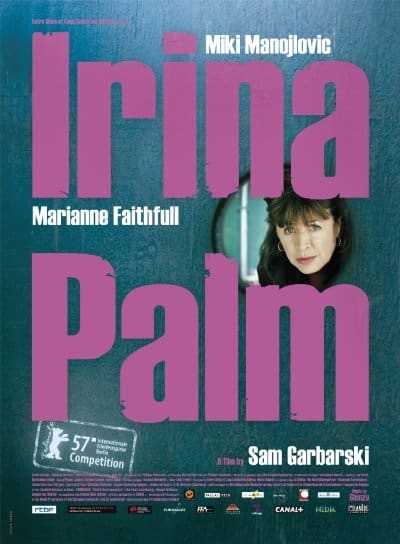 It also happens to be Christmastime, and in a painfully cruel series of ironic twists on all that fake good will season rhetoric, Maggie is summarily turned down for crisis cash at the bank by a loan officer in a ridiculous Santa Claus hat and surrounded by glittering trees, and later dismissed outright at the unemployment office, as just another marginalized, economically desperate old woman with no work history.

Having led an existence quite sheltered from the real world, Maggie spots a help wanted notice for a hostess job in the window of a sleazy downtown Soho strip club, and applies, taking the job title literally. Miki (Miki Manojlovic), the cranky Eastern European club owner, at first ridicules the serious-minded senior applicant, then notices that she may have a special gift that transcends age or sex appeal – a pair of exceptionally soft hands.

So Miki sets Maggie up for a probationary trial run administering anonymous hand jobs, to put it bluntly, to unseen clients through a well-positioned hole in the wall of a scuzzy back room. Maggie is shocked and revolted to say the least, but with the prospect of her grandson’s life coming to an end, she methodically goes about her well-paying chore in her household cleaning smock, until routine eventually replaces revulsion.

Taking to heart more than a little the maxim that beauty’s only skin deep, while turning a whole menu of storytelling conventions on their head, the film does just that as Maggie’s unique talent – of which she’s completely unaware mind you – becomes the stuff of local legend. And long lines of lusty customers to partake of this grandma’s great right hook, are soon forming, as they increasingly ignore all those nude young dancers cavorting around the club. Maggie is such a hit, that Miki rewards her – in his own way – by renaming her Irina Palm on her door sign advertising her wares. And when she gets mad enough to bawl him out for issues around worker exploitation, Miki not only begins to notice her as a person and connect to her human side, but may also be becoming captivated by her as a woman.

Director Sam Garbarski has crafted an extraordinarily unique and touching film, combining sleaze, social satire, feminism, and romantic grace to create a tenderhearted tale of found love, female empowerment, and redemption from the collective dehumanization inherent in commercially driven society. And he actually pulls it off, give the guy a hand. On second thought…