Mexico is famous for its drug cartels, murders and kidnappings, but lurking below this crime-infested surface is something even darker. It has one of the most active international organ trafficking networks in the world and nobody is taking any notice, it seems, apart from the filmmakers of Inhale.

Paul Stanton, a District Attorney, is the father of Chloe, an 8 year old girl with a degenerative lung condition. She is on the waiting list for a double transplant but time is running out and Chloe’s doctor is pessimistic about the young girl’s chance of finding a donor in time to save her life. The doctor surreptitiously suggests to Paul and his wife that there is another option; you go to another country and buy one. Paul picks up the mantle and the race to keep Chloe alive is launched.

The plight of this family is well drawn and only the most stony-hearted would criticize the desperate parents for acting outside of the law but, as the veins that lead to the coveted organs become more and more entwined, more and more decisions have to be made and it becomes Sophie’s Choice all over again, but with even weightier consequences. 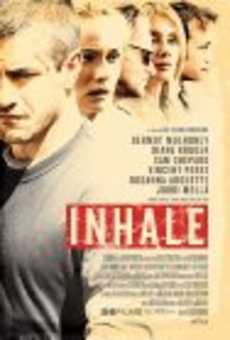 This is a character driven drama; it’s high drama, for sure, but it’s still drama, and the decision by the filmmakers to create violence and action sequences add nothing to the story. Besides, Paul is a District Attorney and we really don’t expect him to go-Rambo or drive his car like a stunt man. There is already enough jeopardy in the story and the perpetrators of the violence seem to create more problems for themselves than they solve. But none of this stops the story marching on and it’s guaranteed no one will leave the theatre early.

So will this film have any impact on the burgeoning illicit organ industry? Apparently not. It seems many international governments and health organizations are aware of these abominations but will continue to let the damned stay damned as long as the rich keep wiring their cash. Which is a moral pollutant, but hardly a surprise.