Quentin Tarantino took over ten years to finish writing the script for Inglourious Basterds, and fans of his grisly brand of splatter fare will undoubtedly find the film well worth the wait. This gruesome World War II saga stars Brad Pitt as Lieutenant Aldo Raine, a half-breed hillbilly from Tennessee who assembles an all-Jewish unit of American GIs for a Nazi scalp-hunting party across occupied France.

Superficially, the storyline resembles that genre of classic war flicks from the Sixties which revolved around a ragtag team of irregulars undertaking a dangerous mission behind enemy lines, pictures like The Dirty Dozen (1967), Where Eagles Dare (1968), The Train (1964), Von Ryan’s Express (1965), The Devil’s Brigade (1968) and The Guns of Navarone (1961). The difference in this case is that Tarantino has, in his trademark fashion, upped the ante in terms of gratuitous gore while devoting considerable time to character development in service of a fanciful tale of sweet revenge that’s partly historical, partly the product of his own fertile imagination.

The film opens in 1941 in a rural region of France where we find a notorious Nazi colonel known as “The Jew Hunter” (Christoph Waltz) intensely interrogating a dairy farmer (Denis Menochet) suspected of hiding Jews. To save his own skin, the frightened Frenchman points out the precise spot under the floorboards of his home where the Dreyfus family lies huddled together breathlessly. Soon, soldiers with machine guns are surreptitiously summoned, and the only survivor of the ensuing carnage is a daughter, Shoshanna (Melanie Laurent), who miraculously escapes into the countryside.

By 1944, the traumatized young woman has resurfaced under the moniker Madame Mimieux as the manager of a modest movie theater she operates with the help of her black boyfriend, Marcel (Jacky Ido), the projectionist. Later, when she is informed that Hitler himself (Martin Wuttke) will be attending the premiere of a new Nazi propaganda film she’s hosting, she decides to make the most of a golden opportunity to avenge the murder of her relatives. So, she and Marcel hatch a plan to kill the Fuhrer, Goebbels (Sylvester Groth) and hundreds of their henchmen by burning the place down to the ground in the middle of the screening.

Meanwhile, Aldo the Apache and his Hebrew-heritaged recruits exact their own measure of revenge for the Holocaust as they embark on a sadistic reign of terror during which they gleefully gut German soldiers in a variety of ways, including bashing brains with a baseball bat, slicing off scalps and carving swastikas into foreheads. The parallel plots finally merge when the gang gets word of Hitler’s coming to the theater from a spy (Diane Kruger), and they concentrate on assassinating him too, setting up a spaghetti Western-style showdown straight out of Sam Peckinpah. 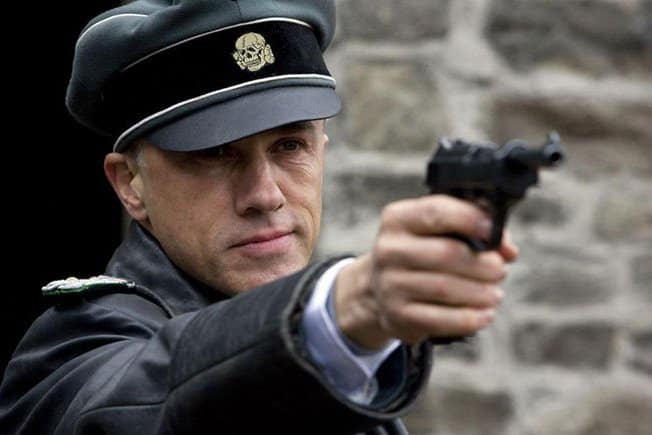 Don’t be put off by all the explicit gore, for it is ultimately vindicated by Inglourious Basterds’ disturbing, self-referential way of delivering a thought-provoking message not only about war and man’s inhumanity to man, but about our insatiable lust for movies about war. Let the debate begin over whether Tarantino is ultimately sanctioning or condemning the exploits of Aldo and company by juxtaposing them against the utterly reprehensible behavior of the dastardly Jew Hunter, the most despicable screen villain since that creep in No Country for Old Men.

Regardless, Quentin again proves himself a master yarn-spinner adept at keeping his audience both entertained and on edge for the duration, ever so deliberately milking the maximum amount of tension out of each of his tautly-edited five acts. Quentin Tarantino’s best yet, a seamless, tour de force not to be missed.