Brooding, tense, allegorical, quirky, tragic and unbelievably funny, In Bruges may be the most intelligent, introspective and bizarre gangster thriller in quite some time, perhaps ever. Irish filmmaker Martin McDonaugh, who honed his craft as a playwright on stage, brings to this devilish social satire in crime caper clothing, an utterly surprising richness of character and storytelling skills rarely observed with such remarkable depth and outrageous wit.

The captivating weirdness begins, as two gruff London hitmen touch down in Belgium and check into a hotel overlooking the quaint, sleepy canals of the picturesque tourist haven of Bruges. Ray (Colin Farell) and Ken (Brendan Gleeson) are two Irish-born hitmen relocated to London to work for short-tempered, foul-mouthed family man godfather Harry (Ralph Fiennes), who has inexplicably sent them to Bruges to await further orders and sit tight ’till it rains.’ Ken, the elder and more relatively mellow of the pair, is as perplexed as his killer mate about this peculiar assignment, but quickly adapts to the setting and gets into sightseeing tourist mode. Ray, on the other hand, is anxious, depressed and angry, beset by frazzled nerves, and he appears to be consumed by some sort of post-traumatic stress disorder suicidal funk connected to a botched hit on a London priest in a confession booth. 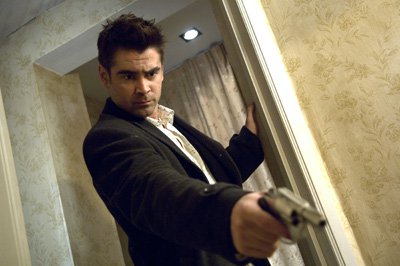 Just as delightful and unpredictable as where exactly this story is headed, are the surprises in store for these hitmen on their most peculiar down time itinerary. Which includes a run-in with a surly midget strung out on horse tranquilizers on a film set in town, an impromptu party with an international assortment of hotel hookers, and a flirty encounter with a local Flemish hottie Chloe, (Clemence Poesy) who communicates in exceedingly broken English and is being stalked by a jealous infatuated skinhead drug dealer who can’t shoot straight and stops by unexpectedly for a quickie shag.

In Bruges, much like more conventional gangster thrillers such as The Godfather, juxtaposes the really not so accidental easy murderous impulses of thugs like Fienne’s psychopathic crime boss, with their staunch family values. And with this peaceful, antiquated Belgian town serving as some kind of deceptive mecca, the surrounding world seemingly spins out of control all around it, as violence co-exists ever more comfortably with morally extolled family tradition. And the paradox of it all sucks everyone into a vortex, parallel trickle-down insanity, expressed in such stark, absurd and irresistible fashion by these luckless and unforgettable characters.