Born in Grand Rapids, Michigan to Ruth Boyd and Doyle James, Dante James currently resides in Durham, North Carolina with his wife Delores, and his daughter Monika. An independent filmmaker, in June 2006 Dante began an appointment as an Artist-in-Residence instructor/filmmaker at Duke University.

For WNET’s Great Performances, he is also developing a feature-length performance documentary on the evolution of Jazz in the Paris community of Montmatre. In June, 2008 he will produce and direct a dramatic film for his undergraduate alma mater, Grand Valley State University.

Mr. James was awarded an Emmy in 2006 for his work on the four-part, PBS series Slavery and The Making of America, narrated by Morgan Freeman. For WETA in Washington, DC, he produced and directed the national Emmy-nominated film, Marian Anderson. And he produced and directed, A. Philip Randolph: For Jobs and Freedom, a 90-minute feature documentary. 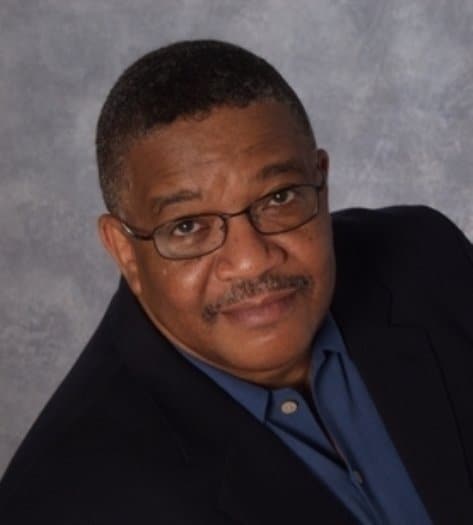 Dante was recognized as distinguished alumnus by Grand Valley State in 1994, and in December 2007 the university awarded him an honorary PhD. In addition, he has a Masters of Arts in Liberal Studies Degree from Duke University.

DJ: I’m fine Kam and I thank you for your interest in my latest film. Too often films of this nature draw very little if any media attention.

KW: Has everything settled down at Duke and in Durham now that the lacrosse team controversy is behind you?

DJ: On the surface, things are back to normal but, unfortunately, both the university and some of the professors who had the courage to confront the issue are dealing with various lawsuits.

KW: How have you been spending your time on campus as Artist-in-Residence?

DJ: First of all, I really enjoy teaching and interacting with students. In the Fall, I teach for the Center for Documentary Studies and, in the Spring, I move over to the Film/Video/Digital Program. So my Fall class addresses non-fiction documentary filmmaking and the Spring class is generally grounded in narrative fiction filmmaking. But being at Duke is very similar to all of my past production efforts. In all of my productions I always have student interns. Students bring a special energy to productions. They see possibilities, where some people who have been in production for a number of years see limitations. I’m not saying that all of the students’ possibilities become reality, but their energy and fresh ideas make an important contribution to every film that I make.

KW: What interested in you turning The Doll into a short film?

DJ: A couple of summers ago, when I was working on my masters, I did an independent study in African-American Literature. I was drawn to the work of Langston Hughes and Charles W. Chesnutt. I read every short story they had written. But The Doll, written by Chesnutt and published in 1904, really resonated with me because of the work that I had recently completed on the Slavery and the Making of America series. One of the things that was important to the slavery series was to go beyond Emancipation and the Reconstruction Era so that viewers could gain a better understanding of the legacy of slavery. The Doll was a dramatic fiction story that addressed the legacy of slavery and much more.

KW: Tell me a little about its author, Charles W. Chesnutt.

DJ: Charles W. Chesnutt was born before the end of the Civil War and grew up in North Carolina during the Reconstruction Era. When he began his writing career, black Americans had been free for only twenty-five years. In the late 1890’s, long before the Harlem Renaissance, before Langston Hughes and Zora Neale Hurston, Chesnutt became the first African-American writer to use the white-controlled mass media in the service of serious fiction on behalf of the black community. Prior to Chesnutt, stories about the black experience by white writers were often degrading and paternalistic. Chesnutt began to define black Americans from their own points of view. His stories reflected the dignity and humanity of black people while also capturing the horror of slavery, racism, and oppression.

KW: I understand that Chesnutt is being honored with a commemorative postage stamp this month. How did that come about?

DJ: I’m not sure how often the US Postal Service decides to honor an African-American with a commemorative postage stamp. I do know that they form a committee and the committee makes the decision as to who should be honored. My good friend Henry Louis Gates was on the committee that selected Chesnutt. It is ironic that two other people that I have made films about have also been honored, Ms. Marian Anderson and Mr. A. Philip Randolph

KW: Will you be participating in any celebrations of his contributions?

DJ: That is a very interesting question in that today a representative from the postal service for the state of North Carolina came to my house to watch the film and said that he definitely wants to include the film in celebrations throughout the state.

KW: When and where in the South is The Doll set?

DJ: Most Chesnutt scholars believe that the setting for The Doll is Cincinnati, Ohio which is technically a northern city. But it is as far south as you can go in Ohio, and it separates Ohio from Kentucky.

KW: Did you write the script? How faithful is it to the source material?

DJ: Joy Kecken, a Maryland based filmmaker and screenwriter and I wrote the first drafts of the script. But as we got closer to production and locations were selected and the film was being cast I made changes in the script to conform to my vision of the film. Yet it was also a collaborative effort in that my students, my lead actor and co producer, and the production designer all came up with ideas that became part of the script.

KW: How did you go about casting the film?

DJ: The original idea was to cast the film with actors from the Durham area. However when Joy Kecken found the perfect location in Annapolis, MD, we decided to cast the film and hire crewmembers from the great pool of talent that existed in the Washington DC/Baltimore area. The only cast member I selected was the lead actor Clayton Lebouef. We had met many years ago and, after seeing him in the HBO film Something the Lord Made, I knew he would be excellent as Tom Taylor, the main character of the story. Clayton, who lives in Washington, DC, consented to assume the role of co-producer and took the lead in casting other actors from the area. The idea was to use local talent to keep our production costs down. Local talent could go home at night, no hotels, and no travel expenses.

KW: What were some of the critical choices you had to make in shooting and editing it?

DJ: The biggest challenge was to make a piece of literature come alive visually while also respecting the integrity of the original story. We had to find ways to compact the story and show the story instead of telling it as Chesnutt does. One of the major changes in the story is the end of the film. The story is set in the early 1900s and tells the story of Tom Taylor, the black proprietor of a hotel barbershop. Taylor’s humanity, his dignity, and his responsibility to family and community are severely challenged when he realizes that he has an opportunity to avenge an injustice that was inflicted on his father decades earlier. The original story ends when the town judge passes judgment on the man who committed the injustice. In the film, Tom Taylor, the black man fulfills that responsibility.

KW: The picture depicts a time when blacks were expected to be very deferential towards whites. To what extent has that aspect of Southern culture changed?

DJ: I think it has changed significantly. The proof is in the support that Barrack Obama is getting. But I also think that there are many isolated incidents everyday where whites in the North and the South still feel and act entitled.

KW: What type of audience is the film aimed at and what message do you expect people to get from it?

DJ: Clearly the film is designed for use in schools, churches, and community groups. Two of the main themes of the film are: Anger and revenge are natural human emotions but how do we deal with these emotions in a civil society? And: If one exacts revenge, how does that act impact one’s family and community?

KW: If a church or a school is interested in obtaining a copy, or having you show the film and lead a discussion group, how can they contact you?

DJ: I can be contacted at 919-475-9879 or via email at [email protected]. Additionally, the film is available along with a guide of classroom activities at DMDFilms.com.

KW: Do you have anything you want to say about the passing of your colleague, St. Clair Bourne? He was a professor at Cornell when I was there.

DJ: St. Clair was a committed filmmaker who opened many doors for filmmakers like myself. His films, his friendship, and his commitment to equality and justice will be greatly missed.

KW: What advice do you have for aspiring filmmakers?

DJ: I’m very happy both personally and professionally but I’m also troubled by film and television images and stories that disrespect the history and culture of black people. I think it is important for filmmakers, actors, writers anyone in this business to understand that the integrity of black people should not be for sale.

KW: Well put. Thanks for the time, Dante’.