This is a story about bullying and is as brave as its heroes in its telling. It cocks a thumb at the politically correct corner, slips off the restraints of self-control and, in unfettered terms, demands an eye for an eye.

When Christian’s (William Johnk Nielsen) mother dies, his father (Ulrich Thomsen) takes him to live with his grandmother in Denmark. On his first day at school he witnesses Elias (Markus Rygaard) being bullied and decides to ally himself with the hapless victim. The two boys isolate themselves from the other students and their adventures begin. Meanwhile Anton, (Mikael Persbrandt), Elias’ father, divides his time between his job as a doctor in a third world refugee camp and the family he adores. 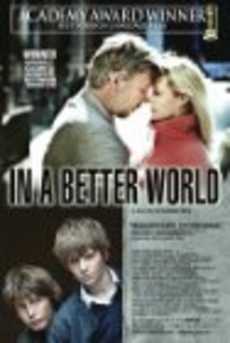 Tension exists in every corner, from the school yard in a middle class European suburb to the tin shacks of an African refugee camp and, although these two places look like opposites, they could not be more the same. Both pulsate with an undertone of barbarism but the similarity is so well disguised we are most beautifully fooled; such subtle filmmaking is rare indeed. When the time comes for us to judge, because that’s what we are asked to do, it’s hard to think even the most ardent pacifist won’t demand the eye back that the bully stole.

The message in this story can be slewed in different ways. The filmmakers question whether our own “advanced” culture is the model for a better world, or if lawlessness is lurking beneath the surface, and it is left for the audience to decide which is so. But the message could also be that, in a better world, the underdog would respond to the aggressor in the same language that was used on him, and thus understanding will be reached. That being said, the writer comes down hard against revenge and assays that, while knee-jerk reactions are born from humanity, war-mongering is not.

As a parent, obviously encouraging violence is totally inappropriate, but taking kids to karate instead of drama classes is quite acceptable. After that, it’s up to them to decide what to do, and if it includes kicking a little ass, so be it. This is obviously an overly simplistic answer to a majorly complicated question but, until someone comes up with a bigger answer, it’s an aptly aggressive place to start.