Unfortunately, the brains behind the latest installment of this animated series abandoned the family-friendly formula which made it so popular with kids of all ages. Instead, they decided to produce a kitchen sink comedy more concerned with generating cheap laughs by any means possible than with spinning a coherent tale that might engage an adult.

Besides an unfocused, scatterbrained storyline, Ice Age 4 features a plethora of preposterous anachronisms which suggest that pirates, togas and telephones existed in an age of prehistoric creatures. Plus, the picture makes a number of distracting allusions to everything from the movie Meet the Parents (“Why do males have nipples?” to Trix cereal TV commercials (“Silly Rabbit!”) to Homer’s Odyssey (seductive Sirens as characters) to the Bible (Book of Jonah).

The upshot is a frenetic, attention-deficit adventure apt to enthrall tykes at the expense of appealing to other demographics. In addition to the principals reprising their roles, noteworthy newcomers to the voice cast include Jennifer Lopez, Drake, Wanda Sykes, Joy Behar, Peter Dinklage, Nicki Minaj and Keke Palmer.

The fun starts when half-squirrel/half-rat Scrat (Chris Wedge) accidentally triggers the continental divide of the planet while trying to bury an acorn in the frozen tundra. Elsewhere, Woolly mammoths Manny (Ray Romano) and his wife, Ellie (Queen Latifah), exhibit concern about their daughter Peaches’ (Palmer) having developed a crush on bad boy Ethan (Drake). Meanwhile, the smitten teen rides roughshod over the feelings of a secret admirer (Josh Gad) she barely recognizes since he’s just a nerdy molehog.

Additional subplots involve sloth Sid’s (John Leguizamo) having to care for his sassy grandmother (Sykes) and, later, Saber-toothed tiger Diego’s (Denis Leary) pursuit of a love interest (Lopez). However, the film’s primary concern is reuniting families left separated from each other on different land masses in the wake of Scrat’s cataclysmic hijinks.

Too bad the resolution of every piece of this cinematic jigsaw puzzle proves predictable. Sad to see a once-beloved franchise jump the prehistoric shark.

Rated PG for rude humor, action and scenes of peril 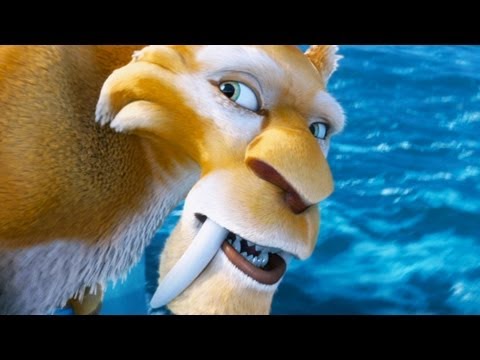