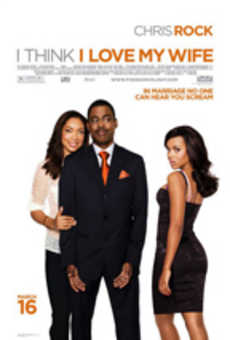 On the surface, it sure looks like Richard Cooper (Chris Rock) is living the American Dream. By day, he has a great job as an investment banker in midtown Manhattan where he enjoys a corner office with a breathtaking view. Evenings, he retreats to his spacious home in the suburbs where he is welcomed by his beautiful wife, Brenda (Gina Torres), and a couple of adorable, well-behaved young children.

So, what’s wrong with this picture? Nothing, except that, despite all of the trappings of success, the pizzazz has gone out of the Coopers’ marriage. The problem is that both of them have demanding careers and, between work and caring for the kids, they haven’t made love in ages.

This asexual state of affairs seems to suit Brenda just fine, but it’s been driving Richard up a wall. He finds himself with an ever-wandering eye, and fantasizing about every attractive woman who crosses his path.

Finally, an opportunity presents itself in Nikki Tru (Kerry Washington), an old acquaintance who has suddenly resurfaced after eight years. She used to date his buddy, Nelson (Orlando Jones), but they broke up ages ago. Now, Nikki says she’d like to be friends with Richard, and against his better judgment, he agrees.

Their daytime liaisons start off innocently enough, but lunch escalates to lust soon after she asks a very personal question, namely, whether or not he and his wife are still intimate. Richard’s admission that they aren’t only encourages Nikki to confess that she has designs on him. 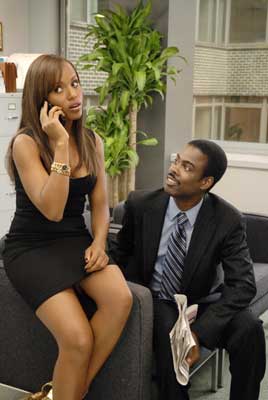 Will the availability of an irresistible temptress lead Richard to break his marriage vows? This is the driving question behind I Think I Love My Wife, a romantic comedy very-loosely based on Chloe in the Afternoon (1972), Eric Rohmer’s relatively-cerebral morality play exploring the meaning of infidelity.

This Americanized adaptation was directed by and stars Chris Rock, who also overhauled the script into a barely-recognizable, formulaic sitcom. And forget about the palpable tension created in the original by the protagonist’s predicament. This transparent tale takes his cues from its spoiler of a title, so everybody knows from the beginning which of the ladies in this love triangle will ultimately be the loser.

Worse is the fact that the picture isn’t funny. It essentially consists of a series of vaguely-familiar skits ostensibly lifted from a variety of other cinematic adventures. For instance, there’s the bit where Viagra triggers a painful case of priapism, ala Scary Movie 4 (2006) and a host of other teensploits. Then, there’s the ubiquitous drug store scene where a guy’s plan to purchase condoms secretly is turned into a source of embarrassment by an insensitive clerk. This ripoff even has the nerve to recreate the seduction scenario from The Graduate (1967), complete with the famous silhouette of the raised leg featured in that classic’s poster.

You are also likely to find the dialogue equally disappointing, unless you enjoy an endless indulgence in profanity and the N-word entertaining. In the process, Rock has squandered the services of a very talented cast, which included co-stars Kerry Washington and Gina Torres, veteran character actors Steve Buscemi and Edward Herrmann, and the decidedly unremarkable screen debut of the otherwise very colorful Stephen A. Smith of ESPN.

An uncreative, unoriginal exercise in the obvious. Richard may think he loves his wife, but I think I hated this movie.