Peter (Paul Rudd) is elated when the love of his life enthusiastically accepts his marriage proposal without hesitation. But only after he and Zooey (Rashida Jones) start to plan their dream wedding does he realize that he doesn’t have anyone to ask to be his best man. Trouble is that, between his fiance and his demanding job as a realtor to the rich and famous, he’s simply been too preoccupied to bother making any friends.

Since time is of the essence, Zooey urges him to find a best man, so he asks his gay brother for help, given that Robbie (Andy Samberg) always seems to be around other guys. With his sibling as a coach, Peter proceeds to go on a series of boy-boy blind dates in a frantic quest to make a close friend.

However, this unorthodox approach to male-bonding proves disastrous, as each encounter turns out to be worse than the last. For instance, Peter discovers that his e-pal Mel (Murray Gershenz) is actually an elderly retiree about 50 years older than the photo of himself he sent over the internet. Then there’s Lonnie (Joe Lo Truglio), a soccer fan who is only interested is in attending L.A. Galaxy games. And the final straw is a dude named Doug (Thomas Lennon) who gets the wrong idea and plants a goodnight kiss on his mouth after a candlelit dinner in a restaurant. 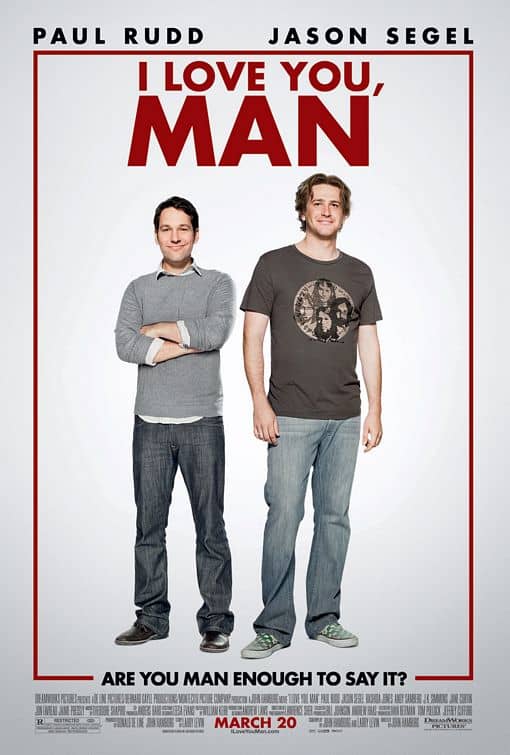 Peter is on the verge of giving up, when purely by chance he crosses paths with Sydney Fife (Jason Segel) a foulmouthed misogynist living alone in a shack near Venice Beach. Sid is a crude slacker who freely admits to cruising open houses in upscale neighborhoods in search of wealthy divorcees to seduce and abandon.

Despite their diametrically-opposed attitudes towards women, the two hit off and soon they’re hanging out together virtually 24-7. Suddenly we find the normally-nerdy Peter exploring his alpha-male side as if desperate to make the most of his last days of freedom as a bachelor. Such a scenario presents countless opportunities to indulge in crass humor, in this case ranging from frank sex chat to projectile vomiting to choke holds to doggy scatology to golf slapstick to more frank sex chat.

Needless to say, Peter’s regressive behavior is not lost on Zooey who begins to wonder what happened to the sensitive soul she thought she was about to wed. And even before they walk down the aisle, “Can this marriage be saved?” becomes the burning question at the heart of this bawdy buddy comedy directed by John Hamburg, the brains behind Meet the Parents, Meet the Fockers and Zoolander..

Provided you have a strong stomach for R-rated fare as shocking as it is sometimes sublime, I Love You, Man is highly recommended, primarily because of the infectious camaraderie of co-stars Paul Rudd and Jason Segel as well as the casually-captivating screen chemistry of its romantic interest, Rashida Jones. Throw in an attention-deficit, laugh-a-minute script expertly executed by a talented support ensemble featuring the likes of Jon Favreau, Jaime Pressley, J.K. Simmons, Andy Samberg and Jane Curtin, and you have all the fixins for a couple hours of hilarious hijinks.

Just remember to check your political correctness at the box office.

To see a trailer for I Love You, Man,