Even if end-of-the-world doomsday thrillers have already been done to death, so to speak, there’s that real life ongoing ill-advised human tampering with nature that contributes more than a little help to the repeatedly reawakened fear and dread of those movies, that just keeps on coming. And I Am Legend is without question no exception in its gut-wrenching dramatic panic scenario as to just how the end of the planet as we know it, may very well play out. Think An Inconvenient Truth: The Last Sequel. Ever 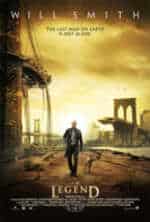 Based on the Richard Matheson sci-fi human extinction classic of the same name, I Am Legend is the third novel-to-screen adaptation, following The Last Man on Earth in 1964 and its freaked Vincent Price, and Omega Man in 1971, with Charlton Heston’s fatal global ghost town one-man-show. This time around, Will Smith does doomsday duty as determined scientist Robert Neville, who’s been holed up in his combo brownstone/cellar laboratory in NYC’s Washington Square Park for years, in a race for the cure for a diseased and virtually disappeared mankind.

It seems that the scientific community fooled around some time ago with the measles virus, reversing its deadly properties and injecting it into patients to rid the world of cancer. But instead, the virus morphed into a highly contagious super-bug, turning ordinarily decent folks into hordes of rabies-afflicted nocturnal howling mass murderers who have lost any sense of civilized behavior along with all body hair, let alone proper social etiquette. And with a scarcity of food on a quarantined Manhattan island cut off from the mainland after all the bridges were detonated, the bald baddies lurk around Neville’s barricaded nest every night, sensing the aroma of their next meal.

I Am Legend is a stark and stunning reality check nightmare portrait of a destroyed world, as Neville roams the dangerous urban wilderness that is now Manhattan, dodging carnivorous creatures, with a rifle in tow. And with his trusty German Shepherd Samantha as his sole companion, lending desperate new meaning to the notion of man’s best friend. Will Smith’s astounding performance as he carries the grim weight of this epic ordeal on his shoulders solo, is never less than physically, psychologically and emotionally shattering from moment to gripping moment. Give the man an Oscar and a stiff drink.