A scandal sheet satire that wears its antisocial tendencies on its sleeve, the self-explanatory How to Lose Friends & Alienate People means to take aim at the inane ‘glossy posse’ gossip rag media world. But more often than not, Curb Your Enthusiasm’s Marx Brothers maven, director Robert B. Weide, dons benign kid gloves just below that aforementioned proverbial sleeve, when punishment to fit the tabloid grime calls for more caustic rather than giddy strokes.

Simon Pegg, who has honed a gift for polished self-inflicted humiliation in movies, is Sidney, a sleazy UK low level celebrity journalist whose writing catches the attention of NYC major player tyrannical magazine editor, Clayton Harding (Jeff Bridges). Sidney accepts Harding’s job offer and eagerly dashes off to relocate to the US. But only to discover that he’s much too ridiculous and decidedly boorish to fit in with these snooty big city scandal snooping sophisticates.

And the confused nitwit hasn’t a clue about acceptable local behavior or dress either – for instance showing up to work in a Rated X tee shirt whose logo will remain unmentionable here, due to extreme bad taste. But in the course of a series of unconventionally offensive accidental mishaps, Sidney, as often happens in these sorts of conventional screwball comedies, manages to get the big scoop and the girl of his dreams, though not before contributing to the demise of a pricey celebrity house pet. Kirsten Dunst also turns up in an unbecoming turn as a sour, contemptuous coworker, along with Danny Huston as a devious editor, and a practically nonexistent Orlando Bloom doing the under the radar celeb thing in shades. 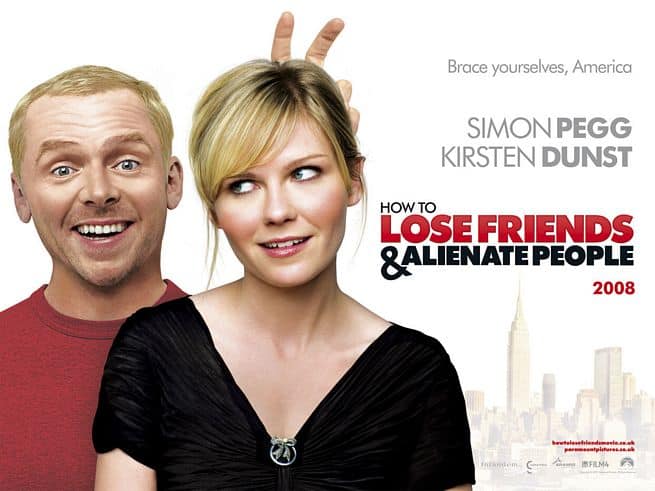 How to Lose Friends & Alienate People works overtime to generate frantic laughs targeting the gossip journalism industry. But sinister rather than tame would have been the more appropriate tone, in a sleazebag media culture where there’s really nothing funny about it.