A tenderly spun tale of female sexual desire traversing three generations of Latina women in an Arizona border town, How The Garcia Girls Spent Their Summer is crafted glowingly from a woman’s point of view, and with supreme sensitivity, dignity, warmth, sadness and humor. Writer/director Georgina Garcia Reidel has woven together intimate homespun memories of the quirky and joyful Chicano culture surrounding her grandmother’s home in rural Somerton, that takes everyone to task for their very human flaws. But nearly always with enormous affection and understanding, and turning the tables on redefining what is most erotic in a man that may have nothing at all to do with how good he looks.

Elizabeth Pena is Lolita Garcia, a lonely and frustrated, heavy drinker working mom. She lives with her hormone-challenged teenage daughter Blanca (America Ferrera), after divorcing a worthless spouse with ‘the stink of women all over him.’ Lolita also fusses over her seventy year old widowed mom Genoveva (Lucy Gallardo), who lives alone nearby. And she has her own eye on the neighborhood gardener, who has offered to teach her how to drive her new car, though she’s never driven one in her life.

And while Lolita toils away miserably in the local butcher shop owned by a one handed butcher smitten with her, she is barely able to resist the advances of the town’s notorious married hunk, Victor (Steven Bauer). Meanwhile Blanca wanders aimlessly around town with her girlfriends, dreaming about being sexually devoured by knights in shining armor, but settling for far less. 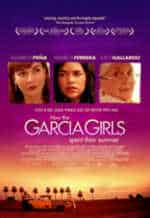 And the nonstop satirical mischief includes a scruffy park bench Greek chorus of elderly gents. These still macho studs in their own minds – one nearly on life support as he clutches a portable oxygen tank – dispense questionable advice about the art of female seduction to one another, local slackers hanging out all day talking mostly cars and women, and often confusing their obsession about the two.

How The Garcia Girls Spent Their Summer is filled with a generous compassion for its characters. And at the same time a critical eye cast upon these females in their most private moments that is always caring and respectful, even when they engage in the most outrageous behavior imaginable. A euphoric journey into the soul, heart and sensibility of north-of-the-border Latino culture.