Boy Wizard Back at Hogwarts for More Hair-Raising Hijinks

Nothing I say here could possibly have any effect one way or the other on the hordes of Harry Potter faithful flocking to see this eagerly-anticipated, sixth installment in the franchise based on the phenomenally-popular series of children’s novels by J.K. Rowling. Furthermore, because the process of adapting any novel to the screen invariably involves making considerable compromises for the sake of the medium, Potter purists might prefer to read a discussion comparing the book to the screen version.

This is even more likely the case when you’re talking about condensing a fanciful, 652-page opus on the order of Harry Potter and the Half-Blood Prince where conflating characters and eliminating extraneous sidebars is necessary to distill the beloved best seller into a scintillating summer blockbuster. Therefore, it’s probably appropriate for this review to address the concerns of those unfamiliar with the books but still interested in knowing whether they’re likely to enjoy the movie merely as an action adventure in its own right.

For that demographic I have great news. “Yes!” Harry Potter and the Half-Blood Prince offers a compelling cinematic experience even for folks such as yours truly who don’t know the difference between a “Muggle” and a “Mudblood.” (FYI, the former is a term used to refer to a person without magical powers, while the latter applies to anyone of non-magic parentage.) But the uninitiated need not worry about such fine distinctions in the Potter lexicon, since this flick’s formulaic storyline is straightforward enough to follow without a glossary. 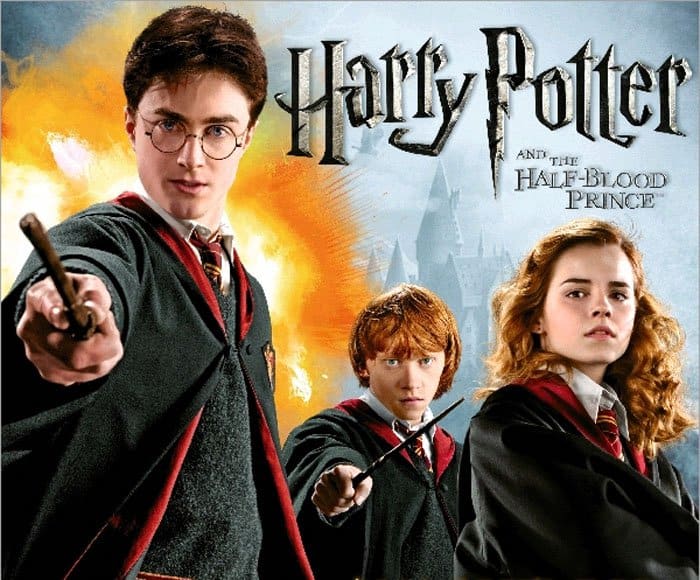 The film was again directed by David Yates who reassembled all the members of the principal cast, including Daniel Radcliffe as the boy wizard who is supposedly just reaching puberty. Rather than hide his 20 year-old star’s five o’clock shadow under pancake makeup, Yates has opted for lighthearted concessions to Harry’s maturity like having someone suggest, “Harry, you need a shave.”

Picking up precisely where the previous picture left off, the Half-Blood Prince opens with Harry licking his wounds from his bloody fight inside the Ministry of Magic with his archenemy, Lord Voldemort (Ralph Fiennes). And we see how Voldemort’s minions, the Death Eaters, are presently wreaking havoc all over London.

Next, Professor Dumbledore (Michael Gambon) encourages a reluctant Harry to return to Hogwarts and enlists the lad’s help in recruiting Horace Slughorn to teach a course there in Potions. Harry subsequently reunites with pals Ron and Hermione for a very eventful semester at the storied School of Witchcraft and Wizardry. Besides the trademark hocus-pocus, the campus is abuzz with raging hormones.

There are so many romances blossoming around the castle, you almost need a scorecard to keep track of them. Let’s see, Ron settles for Lavender when Hermione gives him the cold shoulder. Harry has the hots for Ron’s sister, Ginny (Bonnie Wright), but so does Dean Thomas (Alfie Enoch).

Harry proves far more concerned about monitoring the movements of his classmate Draco Malfoy and of inscrutable Professor Severus Snape whom he suspects to be in league with demonic Lord Voldemort. The truth comes out during a dramatic confrontation in the Astronomy Tower which sets the stage for the next sequel.