Arriving for a final curtain call in theaters following numerous temporary bows throughout the years, this last Harry Potter is yet again faced with the additional ordeal of outdoing itself in its multiple incarnations. As Harry Potter And The Death Hallows Part 2 marks the end of an elaborate soup to nuts venture for these coming of age and beyond characters. But that may be a decidedly less than predetermined journey for its young stars in the real world, where an abundance of happy endings don’t necessarily materialize. 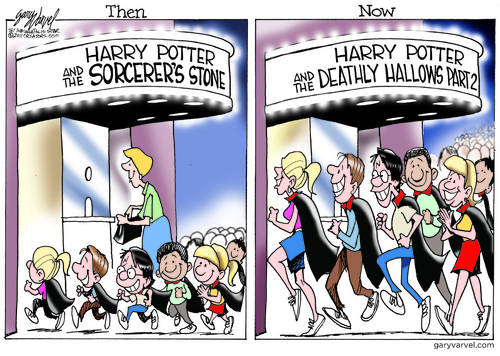 And since any film should be required to stand on its own no matter what fanfare precedes it, how does this Harry Potter hold up on its own merit. In that regard, you’re likely to feel as mystified as the bespectacled teen wizard and his mates, as they plunge into further puzzling adventures.

And like dining on unfamiliar foreign cuisine for the first time, this Potter is best consumed as a dazzling, hocus pocus visual buffet, enchanting the senses and defying logic. In other words, just enjoy the ride and don’t bother with explanations.

Which entails a mix of fantasy and Freud, and counting rude goblins, grotesque mutant creatures, malevolent magic, terrifying, negative male role models in need of defeat by rebellious adolescents, a kind of metaphorical Oedipal wand in search of its wizard, and stealing kisses during incidental fleeing. Along with the usual unraveling blockbuster enigmas discussed in hyper-serious tones, as if the continued existence of the universe depended upon it.

And if nothing else, the series comes to a conclusion satisfying every imaginable youthful thrill to kill really bad grownups, and cleanse a really cool school of evil. Before heading back to the one in the real world, not quite measuring up to that Hogwarts School of Witchcraft and Wizardry.