While geeks have monopolized movies for some time now as unlikely wimps turned he-men and superheroes, apparently old geezers would like their turn too, if Daniel Barber’s senior slasher spree Harry Brown is any indication. And while extreme wish fulfillment fantasies in a movie can be quick fix self-confidence boosters, however peculiar, trying this homicidal revenge out in the real world is not recommended. Especially for those prone to chronic cardiac conditions and advanced arthritis. 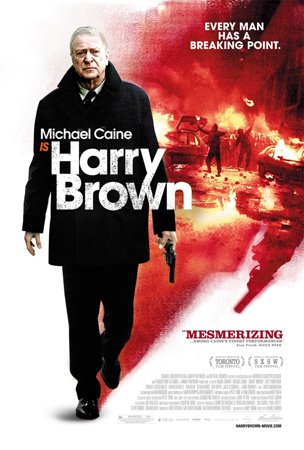 Not that he’s a novice when it comes to torturing, maiming and incinerating potential adversaries. It seems that Harry learned a thing or two about interrogating and slaughtering suspects while stationed as a marine in Northern Ireland way back when. And he’s still quite handy with a bullwhip when extracting confessions from a kid with a paper bag over his head, since according to this movie there’s no difference between freedom fighters and psychopaths. Abu Ghraib anyone?

Assessing the police as powerless to assist, in particular fretting but frail head detective Alice Frampton (Emily Mortimer), Harry goes free lance undercover, infiltrating the indoor marijuana farm presided over by the reigning young thugs. And while the dapper elder’s house call shopping for a gun to allegedly kill pigeons should have been an automatically suspicious giveaway as to his true intentions, the gang may have been too stoned on their own product to notice. In any case, the youthful villains can be spotted immediately even without any supporting criminal evidence, since they all have bad teeth, massive tattoos, and seem to speak English backwards. At least to an untrained Yankee ear.

Caine’s geriatric vigilante sniper who escapes from a hospital bloodied but unbowed to save the nation, may have some justified gripes against UK ghetto youngsters with bad behavior. But the ‘don’t trust anyone under thirty’ generation gap carnage that ensues with violence as the sole problem solving solution, is really not the kind of role model example that the community elders should be setting, by killing them all and sorting them out later.

And though the never disappointing Caine can turn whatever shoddy thriller into a near masterpiece, even if he might opt to play Godzilla somewhere down the line, there’s something radically distasteful about a film that blames the faceless masses living in miserable poverty for their own plight. Especially when it’s thespian affluent have’s impersonating the demonized have-nots in a movie.