Looks like Spencer Breslin may be posing some serious competition for his superstar sister Abigail, as he does his leading boy, Little Mister Sunshine thing in the really offbeat comedy, Harold.

Not your typical suburban high school kid by any means, Spencer as Harold is prematurely bald since age five, and with aching bunions down below. But the thirteen year old’s highly unusual lot in life has given him a resigned, even cheerful outlook, and acceptance by his peers. That is, until his high strung single mom (Ally Sheedy) gets a promotion and relocates the family to a brand new burb.

When not being ridiculed and assaulted by the resident bullies at his new high school, Harold is mistaken around town for an old man. This state of affairs isn’t necessarily a disadvantage, as when landing by accident in a strip club where the lap dancers find his bald spot sexy. But receiving a prostate rectal exam when showing up for his high school physical from the local doctor, does have its down side. 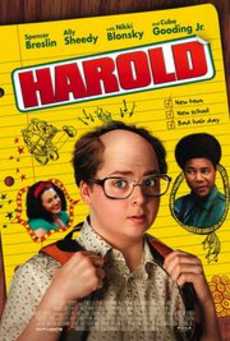 Not to worry, coming to the rescue of the boy is unlikely father figure and weird high school janitor with a nifty ‘fro, Cromer (Cuba Gooding Jr.) The opposite of Harold when it comes to being overendowed – with hair that is – Cromer, who’s got a thing for ‘Internet entrepreneurs’ with names like Kitty Von Squeeze, also has a master plan in mind for Harold to zap all those bullies.

Harold is packed with nonstop freaky episodes filled with freshly conceived laughs, and a genuine sense of the agony and very occasional ecstasy of that mandatory torture chamber known as high school. And there’s a wild cast of cameo kooks to round out the zany proceedings, like SNL’s Rachel Dratch as Harold’s perky space cadet teacher.

Nikki Blonsky also turns up, though looking much too old for high school, as a vivacious chubby classmate with an enormous crush on the insecure protagonist with hairy issues. Harold, a kinder, gentler Superbad minus the talking dirty teen motormouths. Move over, Judd Apatow.