Veit Harlan (1899-1964) was a notorious Nazi director whose vitriolic films helped immeasurably in the effort to send Jews to the ovens by the millions. Despite greasing the skids for his pals Hitler and Minister of Propaganda Goebbels, Harlan somehow managed to beat the rap when he was put on trial after World War II for having committed crimes against humanity.

The prosecutors claimed that his movies amounted to the cinematic equivalent of a murder weapon, given how they had been deliberately designed to inflame anti-Semitic passions among the Aryan masses. After all, Harlan’s most popular picture, Jew Suss, revolved around hateful stereotypes, including one of a Jewish rapist. 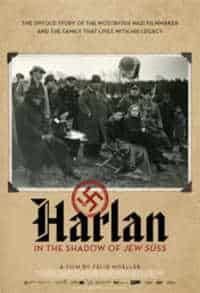 Plus, it featured German citizens chanting “Kill him! The Jew has got to go!” while chasing the perpetrator through the streets with torches in a manner reminiscent of the bloodthirsty mob scene in Frankenstein. In 1943, Jew Suss swept the Deutsch equivalent of the Oscars, further evidence that Harlan was a Fuhrer favorite.

On the witness stand, the unrepentant Hitler henchman rationalized that he had only followed orders, that some of his best friends were Jews, and that he cast some as actors in his flicks before they were dragged off to concentration camps and gassed. Harlan also pointed out that his first wife, Dora Gershon, was Jewish, despite the fact that he divorced her due to social pressure during the rise of the Third Reich in the Twenties. He would replace her with a much younger trophy wife, glamorous actress Hilde Korber, a blonde who went on to star in most of her hubby’s popular Nazi sagas.

Lucky for Harlan, who shot 20 features for Hitler, the jury bought his “The devil made me do it!” defense. Thus, he was able to resume his career (apolitical, but garbage) and to live out the rest of his days in the lap of luxury with his spouse and three kids until he passed away while vacationing on the exclusive Isle of Capri.

Harlan: In the Shadow of Jew Suss, chronicles this infamous monster’s life from rise though retirement via snippets of his films, home movies, and interviews with surviving relatives, such as niece Christiane, the widow of Stanley Kubrick. Sadly, a few of his jet-setting grandchildren appear to have been blissfully unaware of the sins of their ancestor until now. Worse, they quite frankly seem a little annoyed at the suggestion that they should feel any shame upon learning of their ugly family legacy and the truth about the blood money that enabled them to be raised to be such clueless, spoiled-rotten rich kids.

Exhibit A as to why every generation needs to be reminded about the Holocaust afresh. Never again!

In German, Italian and French with subtitles.

To see a trailer for Harlan: In the Shadow of Jew Suss, visit: http://zeitgeistfilms.com/harlan/trailer.html