Can a frustrated actor who’s been resigned to doing television commercials for herpes meds, breathe new life into Shakespeare as an overly enthused novice high school drama teacher relocated to Tucson? And by penning a Hamlet sequel resuscitating all the dead characters via a time machine also transporting Jesus, Einstein and Hillary Clinton? If the irreverent social satire Hamlet 2 has its say with audiences, those lunatic possibilities may prove just that on screen, with daring if not shocking humor.

Hamlet 2 is the daffy brainchild of writer/director Andrew Fleming (Nancy Drew) who also pushed numerous buttons with his Watergate farce, Dick, and co-screenwriter Pam Brady (South Park). As such, the political and scatological often make for an uneasy mix, at times competing for attention and a comic tone in search of an anchored identity, though never for lack of earnestness. 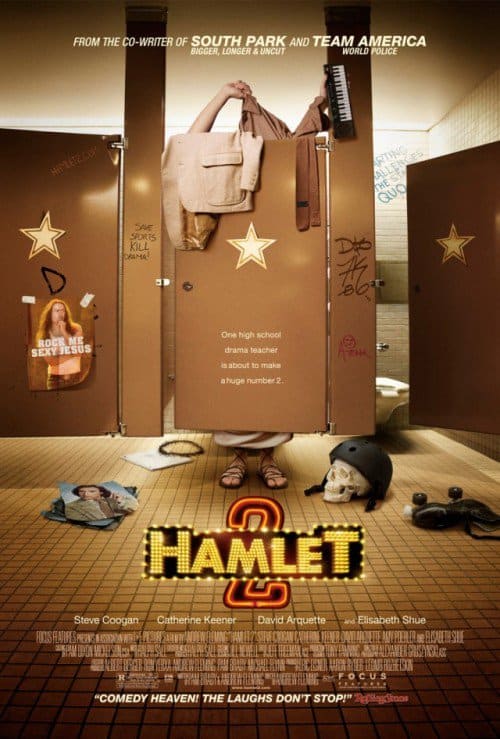 Steve Coogan is Dana Marschz – Mr. M to his students – the unfortunate teacher in question and strapped for cash failed actor, whose only affordable mode of transportation around town is roller skates. Never mind, his current consuming ambition in life is to instill in his far from enthused students a love of drama. Meanwhile, his cranky wife (Catherine Keener) who’s taken in a robotic boarder (David Arquette) to make ends meet, threatens to go back to dealing drugs if he doesn’t start making more money, when she isn’t checking on her biological clock and dragging him off to an infertility clinic. There he runs into a staff nurse not only played by Elizabeth Shue, but who is Elizabeth Shue, having grown fed up with Hollywood and undergone a radical career switch.

And while Mr. M frantically composes his revamped Hamlet/Jesus combo sequel musical, running around the school in a caftan and minus underwear in order to create an optimum room temperature for his inadequate reproductive apparatus, the principal is in his own act of eliminating drama and other arts funding altogether, due to a budgetary crisis. Not to worry, Mr. M makes creative use of ever smaller rehearsal spaces the class is squeezed into, and with a little help from Elizabeth Shue, including corners of the snack bar and gym. And finally an abandoned warehouse after Mr. M is tossed off the school grounds for a possibly obscenity-riddled play, with content shockers like a sexy Jesus (to be played by Dana himself, who else) and Satan kissing the US President.

Against all odds, and with aggressive backup from grouchy ACLU advocate, Cricket Feldstein (Amy Poehler), the show does indeed go on. Where incredulously, Mr. M works out his own dad issues on stage and on the sly, as his Hamlet and Jesus bond over problematic father situations of their own. Hamlet 2, a tossup depending upon your idea of funny, between to be or not to be blasphemous, or just plain wickedly zany.