Not exactly a road movie in the traditional sense, Gran Torino is a combo tragic and goofy journey through time rather than space, as the film’s director and star Clint Eastwood gets into surly senior power. And while flexing those rejuvenated geriatric muscles, but mostly verbal and otherwise. Though what a tongue lashing indeed, poised to give those Superbad youngsters a run for their money.

It’s an odd but never less than intriguing addition to the end of year wrap-up movie season. Especially on the heels of the historic Obama racial reconciliation victory, as Eastwood reinvents in his Gran Torino protagonist a dying breed in more ways than one, of race obsession and divisiveness. Though not exactly the stereotype conjured by Obama, this guy clings to his guns but blasts religion, as he nearly terrorizes the local young priest (Christopher Carley) he’s fond of referring to as an underqualified, overeducated virgin. 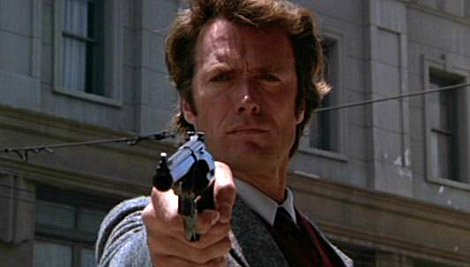 A decidedly mixed bag in storytelling and temperament, Gran Torino is based on a Dave Johannson and Nick Schenk story and with a screenplay written by Nick Schenk. The various disconnected threads of this tale and lack of coherent structure should come as no surprise, in the context of Schenk’s previous script, titled Factory Accident Sex. Nuff said.

But Clint is never less than up for the formidable mission, doing a deliriously dark and funny Dirty Harry self-parody. And with a Beevis and Butt-Head style persistent growl in reaction to the dreary state of the world, that will surely bestow upon his character Walt Kowalski, instant movie icon status.

Walt is a Midwestern alcoholic widower who sits on his porch all day, veering between fuming and sulking. A retired Ford assembly line worker who clings to his beloved 1972 vintage Gran Torino, nearly daring any neighborhood varmints to even think about coming near it, Walt is also disgusted with his adult sons and their families who just want to get rid of their bothersome dad, by warehousing him away in an old age home.

A veteran of the Korean conflict, Walt is still apparently fighting that war against any alien race available, at least inside his head. And he appears to have never recovered from post traumatic stress syndrome, though Walt is a proud, decorated war hero. But he crosses a dangerous line into the real world, when an ethnic Chinese Hmong family moves next door and immediately incurs the wrath of a local youth Hmong gang against their teenage son, Tao (Bee Vang). And when that family feud spills across his lawn and the invisible DMZ line he’s designated as off-limits, Walt loses it and then some.

It’s at this point that the unfocused tale breaches a line of believability as well, and Gran Torino trades that collectible buggy in for, well, Taxi Driver, as Walt morphs into a septuaginarian Travis Bickle vigilante on a rampage. And with Tao’s spunky sister Sue (Ahney Her), whom Walt is into gallantly protecting, doing a suburban version of Jodie Foster’s streetwise femme fatale, Iris. Though even as the story loses solid ground, Clint’s Walt remains steadfast as the bulwark of the collapsing narrative

Eastwood takes audiences on a wild metaphorical ride with Gran Torino, as Dirty Harry looks set to clean up his act. Or is he he? Clint playfully keeps audiences guessing and on their toes, for the delightful duration.