If you were raised in an African-American community, then you’re probably very familiar with the notion of “good hair,” a term that’s generally applied to folks born with wavy locks which are less trouble to take care of than the more tightly-curled or nappy variety. Back in the Sixties, at the dawn of the black pride movement, the afro was embraced as an alternative to adhering to the white standard of beauty associated with straight hair. But the peasy natural proved to be a short-lived fad which unfortunately has pretty much gone the way of the dashiki and the dinosaur.

Consequently, black hair care has blossomed over the years into a multibillion-dollar industry opromising sisters silky tresses via a variety of avenues ranging from hot combs and relaxers to wigs and weaves. Regardless of the combination picked, straight hair comes at a considerable cost, given the toll this high-maintenance habit tends to exact not merely financially, but also in terms of one’s time and mental and physical health. 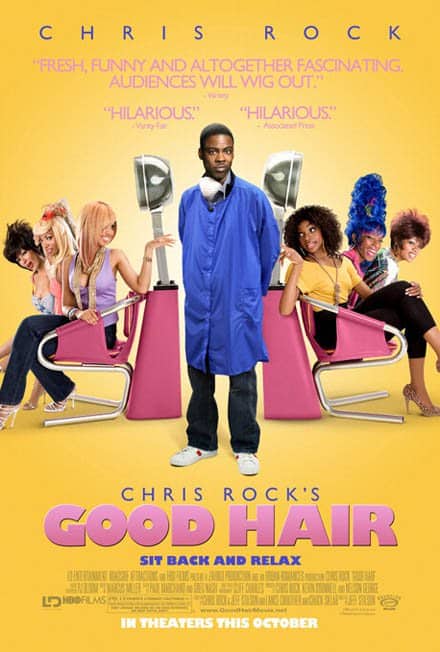 It was this litany of concerns which caused Chris Rock to react when his 5 year-old daughter, Lola, asked, “Daddy, why don’t I have good hair?” Dismayed to think that she might already be struggling with a sensitive self-esteem issue at such a tender age, he decided to do some serious research in order to figure out exactly how to answer her sensibly.

So, accompanied by a camera crew, he embarked on an exhaustive inquiry into the black hair care business from every angle, conducting probing, if periodically comical interviews at beauty salons, barber shops, conventions, factories and scientific labs all across the U.S. and overseas. The product of that peripatetic prying is Good Hair, an alternately jaw-dropping, informative and thought-provoking documentary featuring Rock in a Michael Moore-like role as a witty, but never really mean-spirited master of ceremonies.

Thus, the typically-acerbic comedian wisely tones down his irreverence here to ingratiate himself with his subjects, which included a bevy of attractive actresses with flowing ‘dos, including Nia Long, Meagan Good, Raven-Symone’ and Lauren London, who willingly share the intimate details of their daily hair regimen. We learn from these lovely ladies that they rely mostly on weaves, which range in price from $1,000 to $3,500, plus installation and regular maintenance.

While that may be easily affordable for a famous celebrity, it makes one wince to watch working women at a beauty parlor admit to purchasing their extensions on a lay-a-way plan. Then we hear the husbands’ complaints about having to choose between paying the rent or the salon bill, especially since they’re not allowed to run their fingers through their wives’ hair. “Don’t even go there!”

Still, the most alarming aspect of this entire expose’ revolves around the widespread use of a substance known as sodium hydroxide, aka lye, as a hair straightener. Well, this toxic chemical is the active ingredient (used in a 5-10% concentration) in “creamy crack,” the slang term used to refer to all so-called relaxers. But because sodium hydroxide can cause burning, scarring or blindness if it comes in contract with human tissue in solutions greater than 2%, it is no surprise that so many users suffer from scarring, scabs and bald spots on their scalps. Testifying about her own personal nightmare is Sandra “Pepa” Denton of the hip-hop duo Salt-N-Pepa, who recounts how she tried to turn her own chemical accident into a fashion statement by shaving the side of her head scalded by creamy crack.

Equally-intriguing are the scenes shot over in India where the population has no idea that the hair they routinely sacrifice in a religious ceremony called Tonsure is being scooped up, de-loused and sold for a small fortune to exporters. After warning the locals to run the other way if they ever see a black woman, Rock returns to the States to focus on exactly who’s profiting from African-American reluctance to accept their kinky hair, concluding that it’s a sign of “economic retardation” to allow Koreans to corner the hair care market in the black community.

That assessment might not be as important to him as the sobering message he ultimately delivers to his impressionable daughters, namely, “that the stuff on top of their heads is nowhere near as important as the stuff inside their heads.” One of those rare flicks you have to laugh at to keep from crying.

To see a trailer for Good Hair,