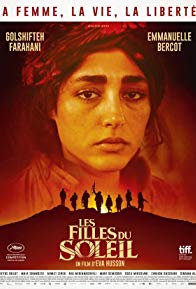 This is a dramatization of a true story about a group of women who are captured by ISIS. They eventually escape and take up arms against those who imprisoned them. It’s a riveting tale and, although it often lacks clarity, there’s just enough of a thread to carry the story through.

It’s August 3rd, 2014. ISIS invade Kurdistan and, 24 hours later, 500,000 people have fled, been killed or captured. Amongst those captured is Bahar. She’s a Kurdish lawyer, who lived with her husband and son in Corduene.

The invaders arrive in the dead of night, line up the men, including her father and husband, and shoot them dead. Her son is torn from her arms and she is enslaved. For years, she is sold, and resold, and resold again, until the day she finds a way for her and her fellow prisoners to escape.

They all head for the Iraqi border where they enlist with the Kurdish guerillas. They don their uniforms, learn how to kill and make it their goal to take back the town from which they were captured.

Misleadingly, the film begins with Mathilde, a French war correspondent. She’s a fascinating lady who finds herself stranded on the Iraqi border. The expectation is that this will be her story but when Mathilde asks Bahar’s permission to cover the impending attack on Corduene, the narrative transfers to Bahar’s hands. The planned offensive lasts for three days and, in between battles, Bahar relates her tragic tale to Mathilde. The stakes for Bahar and her fellow prisoners could not be higher and relating these truths in flashbacks does nothing to add to the tension. A linear tale would have been so much more powerful.

Some of the most compelling moments in this film are when Mathilde and Bahar interact. Two unassuming giants, crossing paths in the wilderness, putting their lives on the line for completely different reasons. Their first conversation begins with Bahar asking Mathilde how she lost her eye and ends with Bahar explaining the significance of her death tattoo. Another inimitable exchange is after Bahar leads the charge to gun down a band of terrorists. She informs Mathilde that even the most ardent warriors balk at the sound of a female war cry. According to IS ideology, no one makes it to paradise if they are killed by a woman. Bahar makes no attempt to hide her smugness and treats her victims as trophies, as she was once theirs.

As their battle comes to a close, Bahar and her comrades take the latest buzz words about ‘bad choices’ to a whole new level. Their angst isn’t about relationships or career moves. It’s about what might happen when they break into a building that they know is occupied by ISIS. If they get inside, and find themselves looking down the barrel of an AK-47, and into the eyes of the 10-year-old boy who’s holding it, do they shoot? Luck, unfortunately, is not on their side, and this is a choice that they do indeed have to make.