False Claims of Anti-Semitism at Center of French Melodrama

If you can recall the sordid scenario and silly media circus which surrounded the tawdry Tawana Brawley case out of New York back in 1987, then you have a decent idea of what transpired over in France in the wake of another real-life incident which is the subject of this cross-cultural melodrama. To refresh your memory, Tawana was a 15 year-old black girl who claimed to have been abducted and raped by six white men, when she’d actually just spent the previous four days partying.

To make her alleged assault sound legit, she ripped her clothing, scrawled racial epithets in excrement on her body, crawled into a Hefty CinchSak on the curb outside of her boyfriend’s apartment and waited for the cops or garbage men to show up. Tawana was immediately suspected of lying because the police reported that the slurs were misspelled and some of their letters were even reversed, as if she’d written them herself in the mirror. 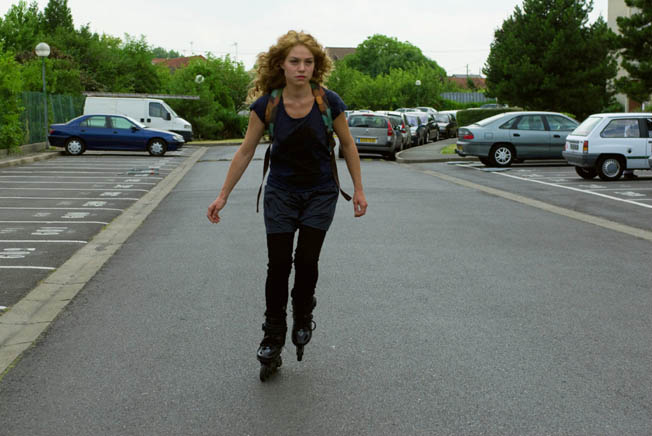 But that didn’t prevent the incident from blowing up into a cause celebre which would divide the country along color lines. And by the time the charges were finally dismissed it had cost a couple of attorneys their careers and one of the falsely-accused defendants his life when he committed suicide. On the positive side, however, it did help catapult Reverend Al Sharpton into the national limelight.

The eerily-similar events recounted in The Girl on the Train unfolded in July of 2004. As the film unwinds, we find Jeanne Fabre (Emilie Dequenne), a 20 year-old slacker, still living at home her mother (Catherine Deneuve), and dividing her time between job hunting and rollerblading around Paris. Things go from bad to worse the day she impulsively moves in with Franck (Nicolas Duvauchelle), a hunky, two-bit hustler who picks her up on the street.

After he’s stabbed and she’s beaten in a drug deal gone bad, she decides to fabricate a tall tale to give to the gendarmes. First, she rips her blouse and chops off some of her hair. Then, she draws several swastikas on her stomach and slashes her face and neck. Her explanation to the authorities was that she’d been attacked by a half-dozen Muslim teenagers, and that a black one held a knife to her throat while the others had their way with her.

The incendiary allegations of anti-Semitism set the whole country on edge to the point where the police felt a lot of pressure to apprehend the culprits, even though they were curious about why the Nazi logos had been painted in the wrong direction. Meanwhile, a Jewish attorney (Michel Blanc) and friend of the Fabre family further publicized the bias attack only to end up the laughingstock of the nation when his almost 13 year-old grandson (Mathieu Demy) saw right through Jeanne’s phony-baloney story. The bar mitzvah boy-toy saved the day by embarrassing the hoaxer into coming clean the morning after they’d slept together.

Directed by Andre Techine (Changing Times) The Girl on the Train is an amusing melodrama divided into self-explanatory halves entitled “Circumstances” and “Consequences.” A cautionary reminder designed to serve as a warning that you don’t always have to rush to pick a side just because it looks like a race or religious riot is about to break out.

Deja vu. How do you say Tawana Brawley en Francais?