Horacio Camandule is Jara in Gigante, the gentle giant title character in question. He’s a shy, pudgy young man who oversees the backroom security cameras overnight in a suburban Montevideo supermarket, to keep tabs on the cleaning staff who might be shoplifting or snacking on the merchandise without authorization, to say the least.

Bored out of his mind with the dull task at hand, Jara allows ill-advised fantasy to get the better of him, as his attention is drawn to an alluring but accident-prone cleaning woman (Leonor Svarcas) who has a tendency to knock over product displays while mopping. And he starts to follow her around the store via the cameras, but as his obsession escalates, he stalks her all over town as well, to her karate class, and even into the local movie theater to take in a mutant invasion movie. 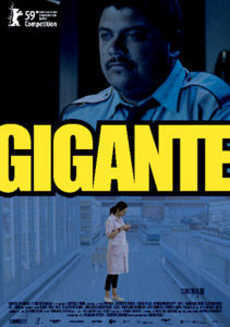 At one point, Jara attempts to interest his young nephew and videogame partner in assisting him in this rather bizarre romantic espionage, but the child balks as the idea. And soon Jara is buying newsstand knitting magazines as an undercover ploy, slugging men making crude remarks to his oblivious object of desire on the street – even though she can’t hear a thing because she’s fully plugged into her ipod – and stalking her blind date and perceived rival too.

Eventually a labor dispute with the store enrages Jara sufficiently, so that he summons enough courage to lose his hearty appetite for a bit, and get even with his bosses while hitting bashfully on his co-worker whose name he has finally discovered. Giddy guardian angel or sulking scary sicko? Director Adrian Biniez keeps audiences on their collective toes and guessing, for the continually surprising and deliciously quirky duration.