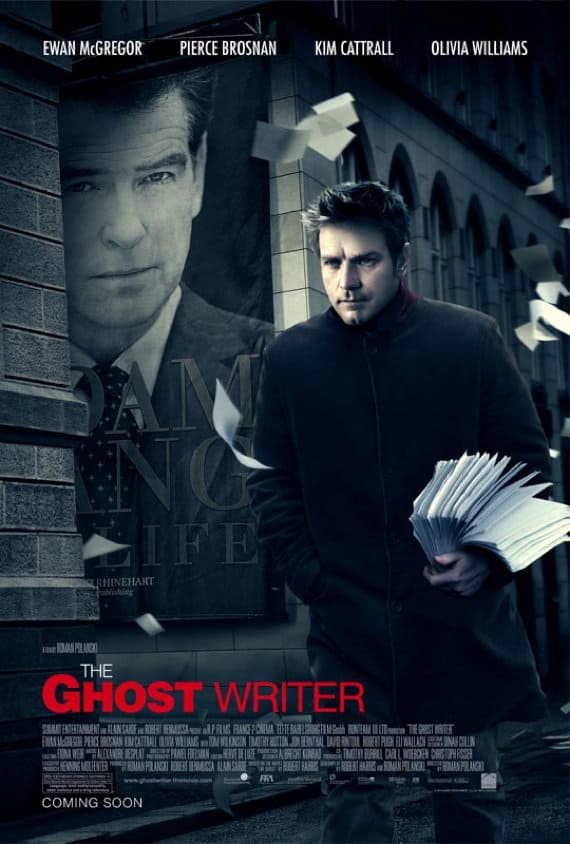 A successful ghost writer, Ewan McGregor, is hired by a former British Prime Minister, Pierce Brosnan, to write his memoirs. A first draft of the book has already been completed by a previous employee and Ewan is charged with picking up the mantel. Brosnan has left the UK and is ensconced on a US island, so McGregor joins him and his entourage there. Within days of McGregor’s arrival, Brosnan is publicly accused of authorizing the illegal seizure of suspected terrorists and handing them over for torture to the CIA. On the surface, this appears to have nothing to do with McGregor and the memoirs, but then information comes to light which raises the possibility that it does.

Brosnan is recognizably Tony Blair, who the UK press christened ‘Bush’s Poodle’ and it’s pointed out in this film that, during his ten years in power, Blair didn’t do anything that wasn’t to the advantage of the US. The UK opposition to the invasion of Iraq was so great that many Brits wondered what the US President could have promised their leader and this film presents a possible conspiracy theory, which would explain Blair’s spectacular wealth since leaving office and if Polanski wants to make a film about that, his audience is guaranteed.

Although the concept of this film is strong, the script is clunky and the relationships between the characters contrived, so whenever they interact it feels unnatural. The rapport between Brosnan’s wife and female assistant is particularly badly drawn and, instead of using subtlety, the wife blurts out a personal accusation in front of political colleagues, which is simply not something this savvy, ambitious woman would do. The directing is heavy handed, with actors over-egging their roles and Kim Cattrall concentrates so hard on getting her British accent right that she sounds like she’s in the ‘theataar’.

If Polanski does do a Ghost Writer Sequel, he’ll discover that Blair took his country to war more times than any other Prime Minister in the history of Britain, and when he finally stepped down was promptly given the job of Peace Envoy for the Middle East. Apparently, as he hopped on the chartered jet with his book contract in his pocket, he was heard to say “Country? What country?”