Not exactly a movie about dying of laughter but close to it, Judd Apatow’s pot luck mock morbid meditation on mortality, punchlines and male anatomy, is strangely as much about the cutting off of life as castration anxiety issues. But writer/director Apatow’s playful hide and seek scenario may finally be more about how the joke is on us.

Adam Sandler mopes and shuffles his way through most of Funny People as George Simmons, a celebrity comedian who’s hit with the news that he has terminal cancer. And while spiraling downward into a state of deepening despair, George re-examines what really matters most in his life, while all the fame and adulation sinks way down to the bottom of that particular checklist.

George also reaches out to Laura (Leslie Mann), the love of his life who parted ways with the incurable womanizer some time ago, and he shamelessly exploits terminal disease as emotional leverage. Even though she’s now married with children to cocky corporate suit Clarke (Eric Bana), but may still have an unresolved thing for her sulking ex-boyfriend. 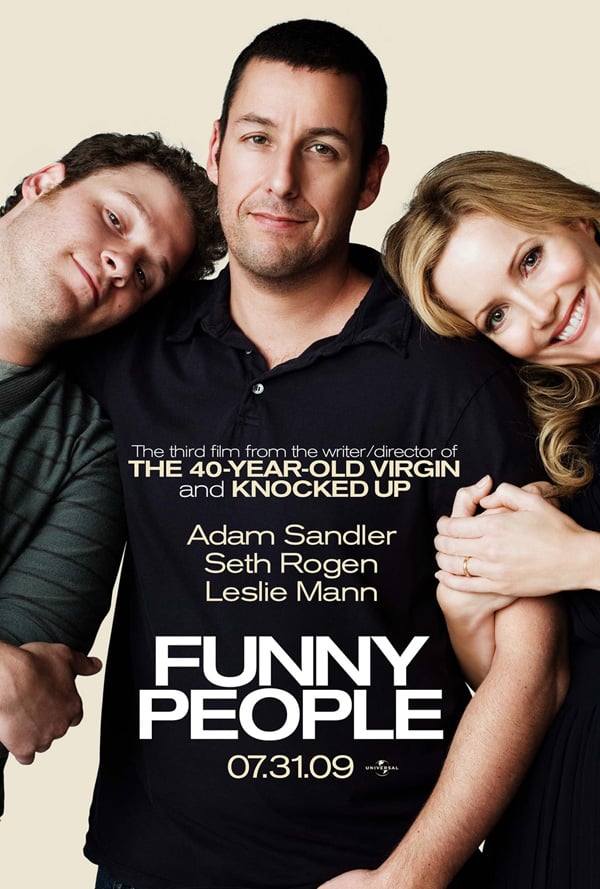 Meanwhile, George has been losing his comic flair on stage, as his jokes take a self-pitying, darker turn in a faceoff with his bewildered fans in the audience, for whom this is no laughing matter. So he hires an elated Ira (Seth Rogen) to ghostwrite more upbeat material, a standup hopeful still doing deli duty who’d rather be on stage even if by proxy, than serving up macaroni salad. But when not concocting performance chuckle incentives for his moody idol, Rogen spends much of the movie explaining his fat to fit makeover, actually a slimdown regimen for another movie, The Green Hornet.