If a title like From Paris With Love sounds as if it may be more than a familiar knockoff of say, the James Bond Russian turf classic, you’re probably not far from the truth. The usual homicidal espionage extinction outing but lacking the bold wit, icy elegance and, shall we say, relative subtlety that has characterized Bond escapades, From Paris With Love is less From Russia With Love than a cynically fashioned version of Pulp Fiction’s comical cruelty.

Chewing up and spitting out assorted exotic scenery as a born again, Soldier of Fortune style serial slaughterer cokehead lunatic is a newly bald and goateed John Travolta as CIA hitman, Charlie Wax. Sent to Paris to supposedly take down a Chinese drug ring there, Wax is teamed with wimpy but determined CIA trainee, James Reese (Jonathan Rhys Meyers). 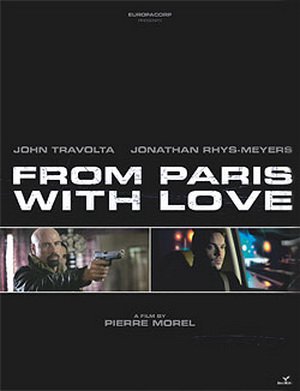 After staging a pornographic tantrum at French customs in order to smuggle his favorite weaponry undetected in soda cans right past them, Wax drags Reese over to a suspect local Chinese dinner dive. Where he proceeds to show the reticent, stunned apprentice exactly how it’s done, by pummeling a posse of armed waiter and kitchen staff, then helping himself to a takeout vase filled with coke, while bypassing the cashier.

Eventually the undercover, mutually reluctant buddy duo crosses paths with Pakistani combo suicide bomber pimps, while Wax stages a series of sneak attack executions in settings featuring mannequin bait and switch dummies, seemingly plastic and human alike. This, while the more refined Reese takes time out to romance his French girlfriend (Kasia Smutniak) who has a talent for designing her own clothes out of the bedroom curtains, when not proposing marriage to her passive live-in lover with her late dad’s wedding ring, because she thought he’d never ask.

From Paris With Love, directed by Pierre Morel (Taken) and adapted from a Luc Besson story by screenwriter Adi Hasak, formerly of the Israeli Airborne Defense Forces, is the kind of sour anti-terror travelogue where the audience is set up to howl on cue when bearded or burka clad Middle Eastern insurgents are preemptively shot in the head or blown to smithereens. Which is an emotionally disorienting state of affairs more generally referred to in psychiatry as inappropriate affect.

As for the ‘love’ part of the title, well, that’s how Wax always refers to his guns, apparently the only objects of his affection on the planet. While on the other hand, this is the sort of movie where any reference to actual women, tends to be accompanied by the word ‘bang.’ Whether alluding to sex or execution for laughter’s sake, take your pick.