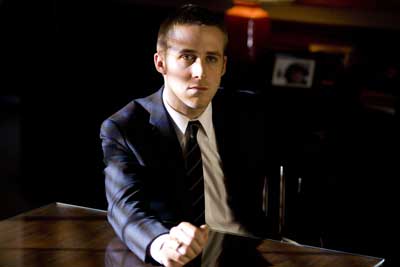 Ted Crawford is a successful aeronautical engineer and CEO of the company which bears his name. The multi-millionaire drives a six-figure sports car and lives in a hilltop mansion overlooking Los Angeles with a trophy wife (Embeth Davidtz) half his age whom he absolutely adores.

However, that thin line between love and hate evaporates soon after he discovers that she’s been conducting a steamy affair with a hunky, young homicide detective (Billy Burke). For he discerns that, without even exchanging names, the virtual strangers have been registering at a posh hotel twice a week under the aliases “Mr. and Mrs. Smith” for uncomplicated adultery.

Instead of confronting either of them about the illicit liaison, Ted instead sets about carefully concocting an elaborate plan for revenge. Then, when ready, he shoots his spouse in the head and rather than try to cover up the crime, he simply waits for the police to arrive and matter-of-factly admits the dastardly deed to the investigating officer, her shocked lover, Detective Nunally. 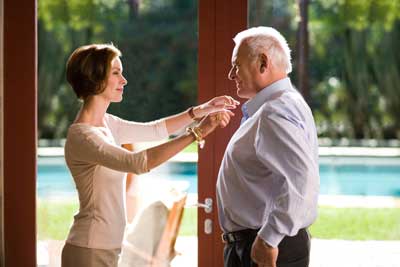 Crawford is carted off to jail for what appears to be an open-and-shut case, especially since he decides to represent himself. However, Nunally never informed prosecutor Willy Beacham (Ryan Gosling) about his relationship with Mrs. Crawford who was left comatose in a vegetative state with the bullet still embedded in her brain.

Because the cops could never find the murder weapon, the state’s case is totally dependent upon the accused’s confession. It comes apart at the seams when the defendant makes a dramatic, unchallenged accusation that it had been beaten out of him by someone who had been secretly sleeping with his wife. Judge Robinson (Fiona Shaw) has no choice but to stop the trial and set the guilty man free because the assistant D.A. can’t purge his only evidence of its tawdry taint.

With a promising corporate career already waiting in the wings, the ambitious Beacham is left torn between moving on to his new job at a top law firm and sticking around to help his humiliated boss (David Strathairn) find the smoking gun. This quandary is the focus of Fracture, a convoluted courtroom drama which might make for compelling Hollywood fare but turns on ridiculous rulings which fly in the face of fundamental notions about double jeopardy and circumstantial evidence. 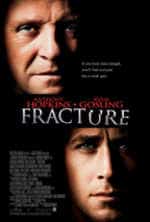 As an attorney who can easily get worked up by such cinematic misrepresentations of jurisprudence, perhaps I should have excused myself rather than review a movie which manages to make a mockery of the legal system. Fracture is, indeed, a fractured feature which establishes itself as a taut psychological thriller only to undercut an intriguing premise with comical 11th hour courtroom antics comparable to the vaudeville act of Pigmeat Markham.