Like the Beatles’ melancholy refrain in the song “When I’m 64,” Harrison Ford was probably wondering whether his fans would welcome back an “older” and “losing my hair” Indiana Jones after a 19-year hiatus. For that’s exactly how old the veteran actor was when Steven Spielberg started filming the fourth installment in the fabled adventure series.

The good news is that Harrison has aged gracefully and is up to the challenge of his physically-demanding role. However, the overall production is slightly lacking somewhat in terms of generating a certain intangible we’ll call movie magic. Maybe the problem lies in the fact that the film will automatically be measured against the three earlier installments, and that it pales in comparison to those vintage screen classics.

Most folks associate the storied franchise with carefully-choreographed, death-defying stunts you can’t get out of your mind long after you’ve left the theater. Although this endeavor does feature several escape and chase scenes, none in this critic’s opinion would be considered unforgettable. 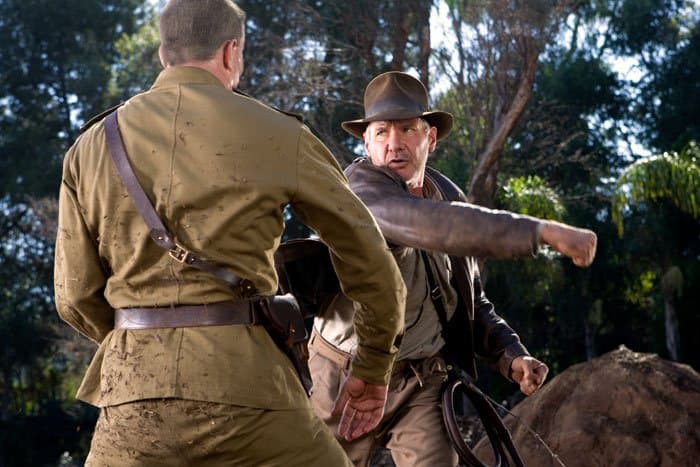 Gone is that palpable sense of urgency which kept you glued to the edge of your seat, a failing perhaps due to an increased dependency of the special effects on computer-generated imagery. So, instead of seeing our hero actually running headlong in front of a careening boulder, riding under a truck, or swaying on a ripped rope bridge over a swarm of hungry crocodiles like before, he spends a lot more time making believe in front of a blue screen. At least he’s still sporting his trademark whip and fedora.

The story is set in 1957 at the height of the Cold War, unfolding in the Nevada desert where we learn that Indy has been kidnapped by Russian spies led by the steely Irina Spalko (Cate Blanchett), an Eastern European villainess cut from the familiar mold of Austin Powers’ Frau Farbissina and From Russia with Love’s Rosa Klebb. Tied up in the trunk of a car, Jones is driven to Area 51, a top secret U.S. Air Force base about to be commandeered by the Commies.

Area 51 served as the site of numerous nuclear bomb tests, but even today many UFO conspiracy theorists believe that the location contains the corpse of an alien removed from a spaceship rumored to have crashed in Roswell, New Mexico in 1947. This is what is of interest to the KGB which wants Dr. Jones to lead them to the Martian’s mummified remains. For legend has it that it might contain the mysterious Crystal Skull, an ancient artifact said to be capable of unlocking limitless powers, provided it is taken to El Dorado, a lost city made of solid gold. 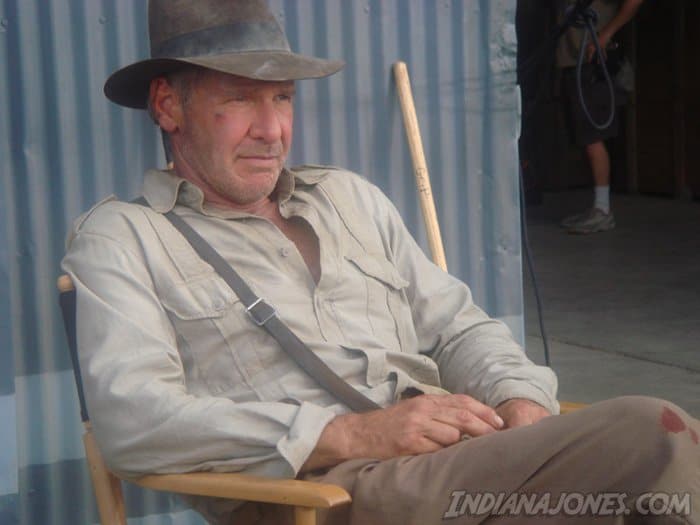 Of course, ingenious Indy escapes from his captors in spectacular fashion (including surviving an atomic blast inside of a refrigerator) and the race is on to find the priceless icon. Along the way, he teams up with Mutt (Shia LaBeouf), a Harley-riding, rebel without a cause, as well as with Marion Ravenwood (Karen Allen), an old flame he hasn’t seen for several episodes, since he was looking for the Lost Ark.

The ensuing expedition to the jungles of Peru is less edgy and dangerous than it is comfy and nostalgic, partially because the transparent plot is telegraphs its punches and is outfitted with a complement of the franchise’s usual suspects, from the maniacal henchman (Igor Jijikine) to the back-stabbing, effete double-agent (Ray Winstone) to the obsessed field researcher (John Hurt) to the weak-willed, bureaucratic academic (Jim Broadbent) who plays it by the book. 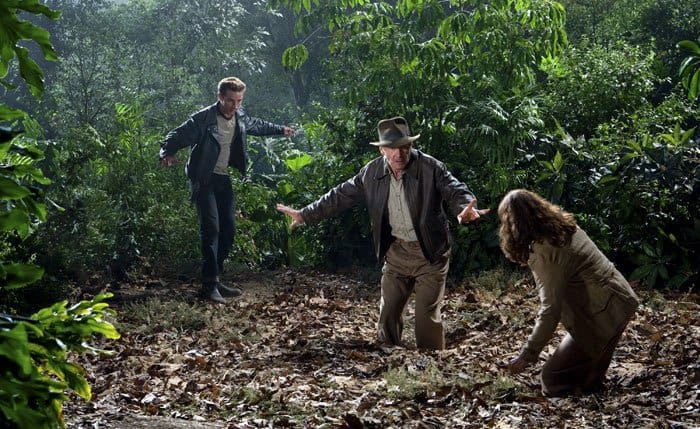 Just thank your lucky stars that Harrison Ford has the charisma to reinvent one of the most-beloved characters in screen history. Indiana Jones, AARP edition: too spry for a rocking chair, but too ossified for much more excitement than a close encounter with E.T.