When a movie bills itself as “Inspired by a True Story,” to what extent should it be allowed to take liberties with the truth to spin a heartwarming tale which tugs on the heartstrings? That is the question which begs to be answered in the course of appraising The Great Debaters, an inspirational bio-pic about a professor who, in 1935, allegedly forged the fledgling debate team at a tiny black college into a nationally-ranked powerhouse that took on Harvard University in a big showdown aired on radio live all across the country. 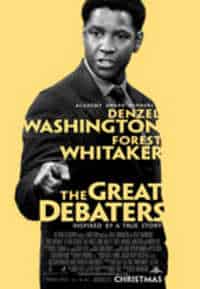 The film’s most glaring, factual faux pas is that while Wiley College did, in fact, participate in the championships finals that year, its opponent was not Harvard at all, but USC. This fabrication naturally makes one wonder about other aspects of this recreation. Was the original contest really broadcast live on radio? (Unlikely) Was it even the first time, as implied, that a black college competed against a white school in the debate tournament? (No) Etcetera… etcetera…

Furthermore, the picture propagated plenty of other tall tales. For instance, there’s a scene where Professor Tolson (Denzel Washington) attempts instill some self respect in his pupils by quoting from Willie Lynch’s 1712 speech supposedly delivered to fellow slave owners about how to mold and control the minds of their slaves.

Well, the problem is that the infamous lecture never took place, and has long been dismissed by academics and experts, some African-American, as an urban legend which first surfaced circa 1993. There isn’t any reference to the speech in any literature prior to then. So, how could a professor have lectured about it way back when? Since I’ve criticized references made to Willie Lynch by other flicks, it would be hypocritical for me to give The Great Debaters a pass just because it’s such a well-meaning message movie.

There are considerable additional conceptual obstacles in the way of enjoying this consciousness-raising costume drama. For instance, whenever the Wiley team debates, it invariably is conveniently assigned to argue the politically-correct side of the issue, whether that be about welfare, lynching, integration, child labor, civil disobedience or elsewhat. Isn’t the mark of a skilled debater the ability to make a convincing case for either side, especially unpopular causes you don’t believe in?

All of the above fibs and fabrications aside, there is still much to recommend here. Denzel certainly delivers as the film’s plucky protagonist, as does Forest Whitaker in his co-star capacity as his less-confrontational colleague, James Farmer, Sr. Gina Rivera and Kimberly Elise capably play their wives, respectively, in support roles which aren’t all that demanding.

The cast is rounded out by the quartet of gifted young actors who comprise the Wiley debate team. Only one of these four characters, lovesick 14 year-old James Farmer, Jr. (Denzel Whitaker), is based on a real person. The precocious Farmer would later found the Congress of Racial Equality (CORE), and go on to become a leader of the Civil Rights Movement.

So, the other three debaters, feisty Samantha Booke (Jurnee Smollett), her womanizing boyfriend Henry Lowe (Nate Parker), and hefty Hamilton Burgess (Jermaine Williams) are fictional. This makes the closing credits a tad misleading, since it relates Tolson’s and Farmers’ subsequent actual exploits along with alleged later achievements of the others, even though they never existed.

One can only conclude that this movie was designed for youngsters, not adults. If that’s the case, do we want impressionable young minds understanding of history to be misshaped in this fashion? Well-Intentioned and well-executed, and recommended with reservations only because there’s still something terribly troubling even about a feelgood flick packed with so many misrepresentations.

Does the truth matter, or is reality retroactively up for grabs? Let the debating begin.