Truth can be stranger than fiction, but it may also be stronger. At least when it comes to documentary filmmaker turned screen storyteller, Guyanese-born Shundell Prasad and her movie, Festival Of Lights.

Best known for her documentaries touching on Indian culture and heritage (Once More Removed: A Journey Back to India, Unholy Matrimony: Escape From Forced Marriage), Prasad moved on to first time dramatic feature filmmaking as writer/director of Festival Of Lights. The story, which she has claimed is in no way autobiographical, begins in her birthplace of Guyana, with an act of horrific violence in an Indo-Guyanese village there. A masked Afro-Guyanese gang has invaded a family’s home, intent on robbery and the rape of a young daughter there. There are apparently longstanding racial tensions that are part of the historical backdrop of the country, where Indian immigrants make up nearly half the population. But none of this context is provided. 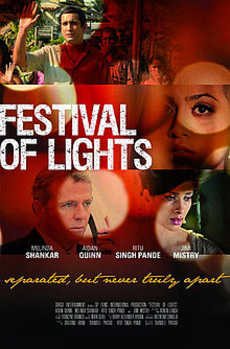 The brutal assault is heard by a neighboring family that is in shock, but remain silent and do nothing. Immediately after, the family including three year old daughter Reshma (Melinda Shankar) and her mother Meena (Ritu Singh Pande) arrange for a quick departure with visas for the United States. But Meena’s husband must reluctantly remain behind, because a criminal record involving immigration activities prevents him from leaving.

The film then fast forwards fifteen years later, to an Indo-Guyanese community in Queens. Reshma is now an obstinate, rebellious teen resentful towards her mother, who has rapidly moved up the social ladder when as a cleaning woman at a company, she married the wealthy owner, Adem (Aiden Quinn).

An ambitious businessman, Adem is fond of bragging about the American dream and how anyone can accomplish what he did with sufficient hard work. That such a persepctive in a movie appears at a time right now during the Great Recession when a 12 percent unemployment rate looms and one million jobs have disappeared this year alone, lends the narrative a sense of historical disorientation, if not insensitivity. In any case, adding to the confusion, are gaping plot holes. Such as, when did Meena actually get divorced from Vishnu to marry the tycoon? Or is she a bigamist? As for Reshma, she’s expelled from high school for a serious infraction, then a few scenes later she’s thrilled to be accepted at NYU. Such weird distractions are more likely than not detrimental to the audience viewing experience, to say the least.

There’s lots more. Including another rape, illegal immigration machinations or maybe not, a surprise miscarriage, and another wedding with anxiety-ridden ramifications. And finally, a lost and found Vishnu smuggled out of maximum security from a prison deep in the jungles of Guyana, on the part of more Afro-Guyanese villains who have official links to the penitentiary. And that may result in Vishnu’s successful escape to America, or a confrontation immigration authorities. Or maybe none of the above.

The sudsy, overloaded drama that afflicts the movie seems bent on substituting quantity over quality, with the latter in unfortunate short creative supply. But what does redeem Festival Of Lights is just that – Prasad’s gift for capturing actual scenes of traditional holiday community celebrations with flourishes of radiant imagery. And an evident indication that the filmmaker should stick to what she does best, in the future.

To see the trailer of Festival Of Lights: