Keeping in mind that there have been at least twenty-one movies with similar titles to Fast & Furious since 1931, one would hope that the stories would not be replicas as well. And while I’m not the one to vouch for anything new and different on the menu with this latest high speed gas guzzler designer fleet crash ’em up since I haven’t seen any of the other twenty-one, I can report with a fair amount of confidence that it’s pretty much same shenanegans, different day.

Vin Diesel’s star appeal works overtime to nicely compete with most of a cast exclusively comprising those car-acters, while the human participants are essentially preempted by all those gleaming, ostentatious road hoggers. Diesel is Dom, a fugitive globe trotting ex-con in an unlikely guy bonding thing with Brian (Paul Walker), an out of control FBI agent. Reigniting a low intensity feud from a prior movie, the two reluctantly team up to bring down a Mexican drug cartel. Dom is fuming over the murder of his girfriend (Michelle Rodriguez) by one of the druglords, so he joins forces with O’Connor. Though he’s never forgiven the bad boy with a badge for doing his sister Mia (Jordana Brewster) wrong in the romance department. 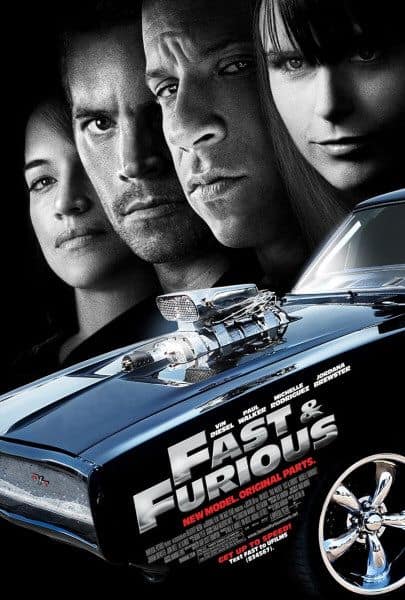 Equal parts high octane and higher testosterone, Fast & Furious gets points for its impressive high speed car-eography over mountains, through deserts, and underground along Mexican drug cartel tunnels, without benefit of border patrol agents, passports or traffic tickets. But this is the sort of suspension of disbelief outing where you have to really be into cars, because there’s not much else going on. That is, beyond scantily clad hottie wallpaper and the insistent lusty designs on a low on libido Dom, by cartel concubine Gisele (Gal Gadot).

Fast & Furious may also be distinguished for parading the greatest number of crash and burn demolition derby roadsters for viewer consumption, though I really have no idea. What I can safely say, is that with Motor City begging for big bucks from Uncle Sam to head off bankruptcy during this looming economic crisis, while gleefully smashing up their product, they have some nerve.