While Mike Judge may be best known as the creator of the MTV animated series Beavis and Butthead, he also has a cult following of devoted movie fans who love his live-action masterpieces like Office Space and Idiocracy. But they are apt to be disappointed by his latest offering, Extract, an ensemble comedy starring Jason Bateman as a sexually-frustrated, flavoring factory owner.

Judge surrounded Bateman with a talented cast which includes SNL’s Kristen Wiig, Ben Affleck, J.K. Simmons, Mila Kunis, David Koechner and Gene Simmons. Unfortunately, they were asked to execute a sorry script which simply isn’t very funny. In fact, its highlights have already been spoiled by the movie’s TV commercial. 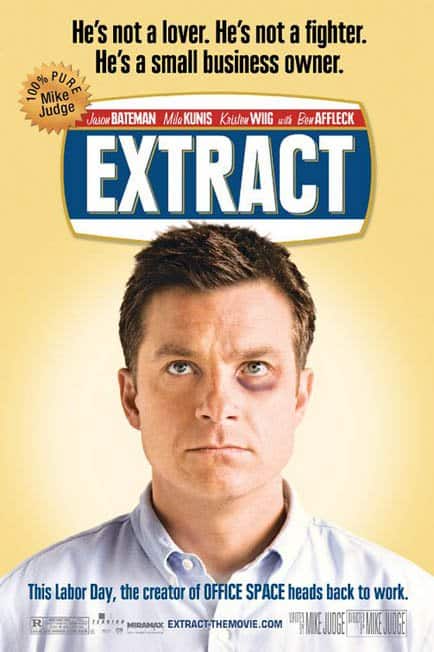 You may recall the scene in the trailer where the word “temp” is mistaken for “tramp,” another where a horse tranquilizer is mistaken for Xanax, and finally the extended one in which an assembly line worker loses a testicle as the coup de grace in an industrial accident which unfolds like a Rube Goldberg contraption. That’s it, all the best laughs right there in the trailer.

The picture’s premise revolves around the miserable plight of Joel, the owner of Reynolds’ Extract, a company which manufactures flavorings. Unhappy both at work and at home, he frequently retreats to a local pub to cry on the shoulder of the bartender, his best friend, Dean (Affleck).

Too bad Dean doles out nothing but awful advice. For instance, when Joel is tempted to cheat on his seemingly-frigid wife (Wiig), his pal suggests that he hire a new pool boy (Dustin Milligan) to seduce her first. According to Dean’s convoluted logic, this will enable Joel to sleep with his pretty employee Cindy (Mila Kunis) with a clear conscience. Of course, that ploy backfires because Suzie starts having an affair with the gigolo but then Cindy shows no interest in sleeping with her boss.

Meanwhile, Joel’s plans to sell the struggling factory falls through after General Mills catches wind of the multi million-dollar, personal injury lawsuit being filed against Reynolds by Step (Clifton Collins, Jr.), the guy who lost one of his gonads. A further complication involves gold digger Cindy’s taking an interest in Step to get her hands on his anticipated legal settlement.

Trust me, the understated humor is decidedly-dull rather than the droll tone which Judge ostensibly was aiming for. Plus, the characters are invariably annoying, most of all Joel’s next-door neighbor Nathan (Koechner), a shameless resurrection of Lundbergh of Office Space fame. Nathan even reuses Lundbergh’s recurring trademark “I went ahead and…” line and repeats it in the very same fashion.

Maybe Judge is just all out of ideas. In any case, there’s no reason to waste your hard-earned bucks on this derivative dud, when you can rent the originals, Office Space and Idiocracy, and actually laugh your butt off.

Rated R for profanity, drug use and sexual references.

See a trailer for Extract: