Cornel West & Company Weigh-In on the State of American Culture

According to Socrates, “An unexamined life is not worth living,” and that quote ostensibly served as the inspiration for this documentary deeply exploring the mindset underpinning American culture. To that end, this readily-accessible discourse on philosophy relies on the novel insights of nine leading academics, beginning and ending with Princeton Professor Dr. Cornel West.

West was interviewed in Manhattan on his way to Penn Station while sitting in the back of a car being driven by director Astra Taylor. He wonders aloud about “What happens when you begin to call into question your tacit assumptions and unarticulated presumptions,” suggesting that you begin to become a different person. He goes on to talk about the challenge to survive in this society in the face of a “patriarchy, white supremacy, imperialism and state power,” and “a structure of domination not accountable to the people affected by it.” 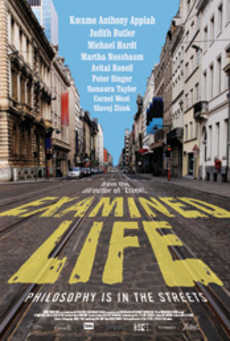 Another Princeton Professor, ethicist Peter Singer, is shot strolling along Fifth Avenue in front of some of the most expensive stores in the world, like Bergdorf Goodman. There, in the midst of unalloyed decadence, he indicts conspicuous consumption by suggesting that we have a moral obligation not merely to do no harm but to help reduce “the amount of unnecessary pain and suffering in the world.”

Endlessly thought-provoking at every turn, Examined Life offers a transcendental experience which amounts to the most satisfying cinematic experience of 2009 thus far.

To see a trailer for Examined Life,