In some ways continuing the journey across America while dabbling in geriatric redemption where Jack Nicholson left off last year in Rob Reiner’s The Bucket List, Robert De Niro hits the road towards self-realization in Everybody’s Fine. Though minus rowdy Nicholson’s better half traveling companion Morgan Freeman, and with a much larger brood of fretting kids tossed into the mix, De Niro’s uncharacteristically muted and mild mannered patriarch makes for a more resonant cross-country dramatic itinerary.

Robert De Niro is Frank Goode, a recently widowed suburban dad and methodically minded retired factory worker. When Frank plans a family reunion dinner at home to bring together his four adult children who have drifted away into their separate lives across the country, the children phone in one by one with excuses to not show up. Frustrated, lonely and painfully struck by the emptiness in his life, Frank packs a suitcase and heart medication, and takes off via public transportation to seek out his children unannounced, since they refuse to come to him. 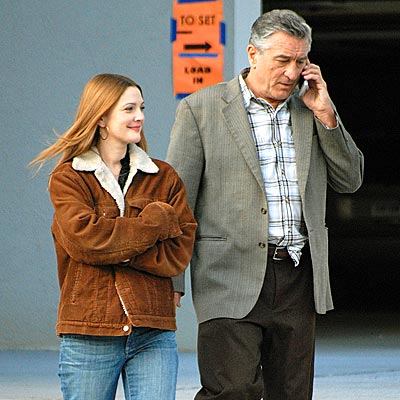 Heading off first to New York City where his youngest and most fragile child David is a struggling artist, Frank finds to his dismay, that his son seems to be out of town. Then it’s off to Chicago, for a surprise visit to his high anxiety ad agency honcho daughter Amy (Kate Beckinsale), and her deceptively picture perfect McMansion family life.

When workaholic Amy drops numerous hints that she’s just too busy for family time, Frank makes his way to Denver and a visit with his classical musician son Robert (Sam Rockwell), who’s not actually the conductor he may have been pretending to be, but does bang a drum nicely. And in any case, was just leaving town himself. And when Frank reaches his final destination, minus his badly needed medication after being mugged, he’s most welcome of all by daughter Rosie (Drew Barrymore), a Vegas showgirl who may also be harboring more than a few secrets of her own.

Meanwhile, Frank’s kids have been burning up the phone lines along the way, strategizing together about how to keep dad from finding out too much concerning who any of them really are or have turned out to be, in the face of a father with rigidly demanding standards of excellence. Though the film provides no evidence to back up this emotionally damaging accusation against what seems like a consistently caring and compassionate parent, other than disgruntled offspring hearsay.

The ironically titled Everybody’s Fine, a remake of the Giuseppe Tornatore 1990 whimsical Italian weepie starring Marcello Mastroianni, boasts a tenderly crafted duality of an aging father evolving along a path of difficult self-awareness, along with seasoned actor De Niro likewise maturing in a more quietly contemplative and introspective new direction. Though an overly repeated cautionary sidebar that continually kicks in here, is that showing up on doorsteps by surprise, even if it is your own kids, may never be a good idea.