A similar disturbing question as to why there are no women directors who have ever received an Oscar, is why there were no female artists through past history, period. The answer of course, is that a number of these women had to pretend to be men, or see their work attributed to prominent male artists.

The acclaimed Swedish period feature Everlasting Moments, addresses these issues, and with an uncommon bittersweet dramatic eloquence that happens to all be true. Based on the life of the great aunt of the filmmaker’s wife, as told to her by the woman’s daughter, Everlasting Moments combines the best of both worlds of stunning biopic that captures the essence of one thwarted yet determined female’s struggle for survival, while at the same time illuminating that cataclysmic historical moment at the turn of the 19th century, as intimately experienced by all these characters.

Maria Haiskinan is Maria, a Finnish immigrant in Sweden and poverty stricken young mother with a brood of perpetually hungry children. Married to Sigfrid (Mikael Persbrandt), a frequently laid off dock worker and brutish, hard drinking womanizer, Maria resigns herself to her lot in life as overworked and physically and emotionally abused, but never surrendering a sense of dignity and optimism. 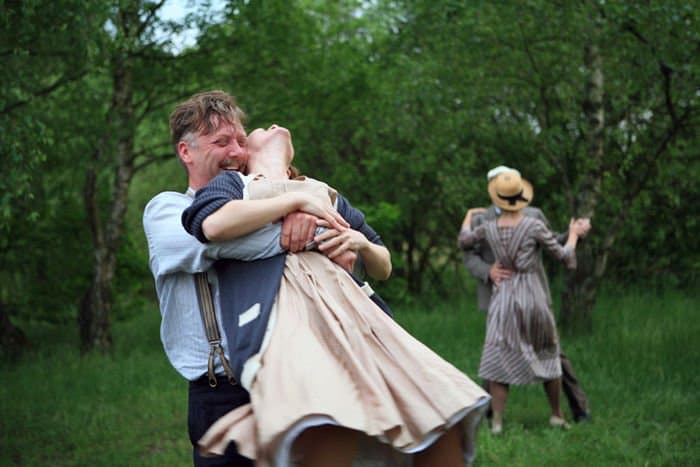 Maria also possesses a camera that she won in a lottery, a mysterious, alluring object which at first has no discernible value to her. That is, until she tries to pawn it at a camera shop, to feed her destitute family. But Pederson (Jesper Christensen), the elderly proprietor of the store, recognizes in Maria’s intense gaze in wonder at the world around her, as a rare quality of being ‘endowed with the gift of seeing.’ And he instead allows her to ‘borrow back’ her pawned camera, to magically discover through photography, her own awakened creative talent and visions of natural beauty waiting to be poetically captured.

Directed by Swedish filmmaker Jan Troell (The Emigrants, The New Land) and a multiple award winner, Everlasting Moments is that rare film which touches the soul in myriad exquisite ways. And opens up to audiences a host of characters who, for better or worse, provide infinite pleasures for those sharing their company. Indeed, how rare is the movie experience where it’s difficult to part ways with the characters one has come to care for so deeply, throughout of the story.

And there is barely a single moment in this film that doesn’t amaze and astonish. Whether focusing on the joys and tragedies of family life; the battles of workers for their humanity; young girls selling their locks of hair for bread; or the flowering of this extraordinary woman as she slowly evolves into someone in the process of figuring out herself and the world and painfully torn between being artist and a mother. Yet ultimately achieving an awkward serenity amid life’s many disappointments and nearly but never quite overwhelming disasters.