A movie that asks us to follow along with it to another century far in the distant past, should have that experience feel immediate and welcoming. Eric Rohmer’s more literal than literary adaptation of Honore d’Urfemakes’ 17th century novel set in 5th century Gaul, makes no such attempt, resulting in an experience that is viewer alienating when not simply tedious.

That’s not to say that Rohmer’s direction of The Romance Of Astrea And Celadon (Les Amours d’Astree et de Celadon) isn’t rich with a sumptuous visual palette that entrances as the narrative conversely withers. But his storytelling gifts are not up to par here, and arrive as wooden as can be.

Andy Gillet is Celadon, a young shepherd deeply in love with Astrea (Stephanie Crayencour), a local village girl. But his family favors a different woman for him. And to please them, Celadon reluctantly parties with her at an outdoor festival. When Astrea catches the two together, she angrily breaks off with Celadon, and he in turn in a distraught state, throws himself into the river. Missing and presumed dead, Celadon is mourned by Astrea, who makes a vow never to love another. 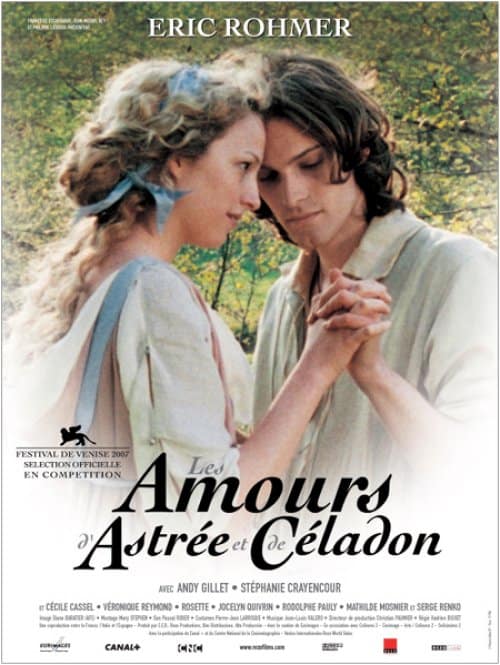 A short time later, Celadon’s nearly lifeless body is discovered by some nymphs out walking by the river bank, and they take him to the castle of a wealthy and spoiled princess who is smitten with him, and attempts to prevent him from leaving. But with a little help from a sympathetic nymph, Celadon escapes dressed as a woman, and resolves to pine away in sorrow in the woods, possibly forever. To make quite a long story as short as possible, Celadon is eventually sort of reunited with Astrea by a devious Druid priest, who likewise dresses up Celadon as a woman. This, so he can pretend to be the Druid’s daughter and cavort with Astrea as best girlfriends, in what increasingly comes awfully close to looking like faux lesbian lust.

French cinema, which is already notorious for endless gabbing that seems to substitute for dramatically intense dialogue, is taken to a new level here as the characters appear to be giving interminable speeches about romantic love and unrequited melancholy, rather than engaging in what they’re talking about. Unfortunately what’s missing here, is any attempt on the part of Rohmer to have us identify with his characters, as he seems to marvel instead at their retro-extinct psychological and emotional expressiveness and behavior. So much so that they could be creatures from a different galaxy.

Lover from another planet.