‘The Enemies of the People” are the words the Khmer Rouge used to describe the two million Cambodians who they butchered in the name of patriotism. This film searches for an explanation for this genocide and in its quest some things are skimmed over, but if it sends you scuttling to the internet to discover more, as it did me, then the filmmakers’ job is done. It’s a remarkable piece of work.

Thet Sambath is a Cambodian journalist and for 10 years spends every spare moment of his life investigating the people who he believes were the perpetrators of the genocide that desecrated his country and took from him a father, mother and brother. Some of the Cambodian foot soldiers, all clearly desensitized by their grisly deeds, confess to Thet the part they played in the massacres, while others are vague, but the person who refuses to admit anything is Nuon Chea, Pol Pot’s first hand man. It is only after many years of patiently meeting, and talking and cajoling that Thet manages to get Chea to trust him enough to reveal the truth about the Killing Fields of Cambodia. 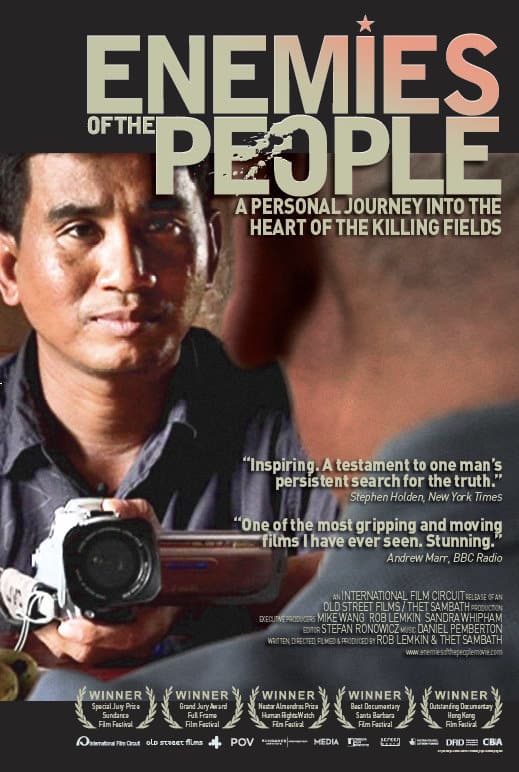 What this film doesn’t tell you is that Pol Pot ordered the murder of all educated professionals and ex-government officials, abolished money and medicine, blew up the banks, turned the library into a pig sty and the Catholic and Buddhist religions were outlawed. Nuon Chea claims that only traitors were eliminated but it is clear from the footage that Cambodians were slaughtered indiscriminately, men, women and children alike.

Thet is a most endearing, gentle man, and it is clear that he is still struggling to come to terms with his grief. He tells the story of how, when he was eight, he asked his big brother to get him a fighting cock. They arrange to meet the next morning and Thet waits all day but his brother never shows. This isn’t the day his brother is murdered, but it seems that Thet is using this incident as a metaphor, still trying to make sense of his terrible loss. It is so desperately sad.

When Thet is trying to persuade Chea to reveal the truth, he does not mention that the Khmer Rouge made him an orphan when he was seven, but later feels honor bound to tell Chea the truth and, on the day Pol Pot’s right hand man is arrested for his war crimes, Thet helps the old man shuffle to his waiting jailers, showing nothing but genuine concern. If to forgive is divine, then Thet is truly godly, and hopefully his divinity will one day bring him peace.