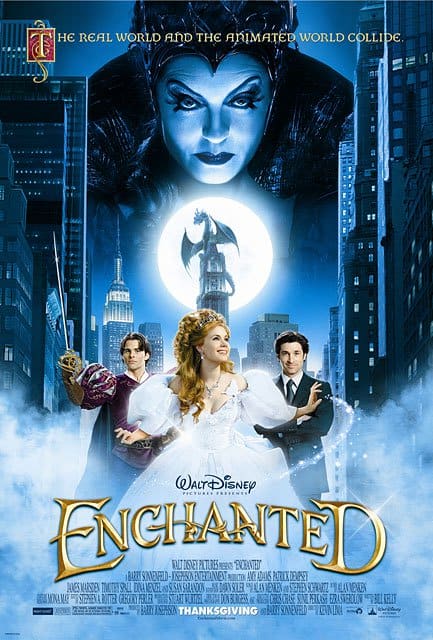 Setting a fairy tale classic in the real world for a mixed-media, mixed bag fantasy like Enchanted, can run a big risk. By dragging mystical storytelling down to our own humdrum planet, the finish on that storybook realm’s imaginative glow can dull fairly quickly. So the question is, does the otherworldy sitcomish mishmash of Enchanted maginify the magic and delight of both worlds, or rather orchestrate a contrived, face-off between the real and surreal that never quite gels.

Kevin Lima’s Enchanted pretty much falls somewhere in the ho-hum middle, never quite decisive about its own personality or identity up on the screen. Not that the performers don’t give it their all. Amy Adams as Giselle, the part-time cartoonish object of desire of the fairy tale kingdom’s Prince Edward (James Marsden) is appropriately giddy and clueless. And Susan Sarandon as the wicked Queen Narissa who conjures a little sorcery when switching it up as a witch on the down low, exudes scare tactics crackling with charismatic menace.

Queen Narissa conspires to banish Giselle to present day New York City, in order to run interference on the tragic heroine perchance tying the knot with her smitten son and displacing her on the throne. Giselle is in for all sorts of rude awakenings when making her grand entrance into Gotham via a Times Square manhole, though owing to the collective weirdness of New Yorkers in general, she and her olden days ball gown are barely noticed.

The comical capers in Enchanted range from refreshingly loony – like the chivalrous prince in pursuit attempting to slay a snorting city bus – to decidedly on the icky side, as when an army of street pigeons, rats and roaches comes to the aid of the ditzy damsel and animal lover wannabe princess. The pot pouri concoction here is the collaborative brainchild of director Lima who likewise helmed Tarzan and Eloise at the Plaza, and Blast From The Past screenwriter Bill Kelly of Premonition infamy, so that should give you a pretty good idea. As for Susan Sarandon’s mean-spirited queen, she may be just a tad too similar to her living counterpart – the main subject of her own heralded film a year ago – who’s fairly notorious herself for not taking a liking in the least to her own offspring prince’s choices in women.