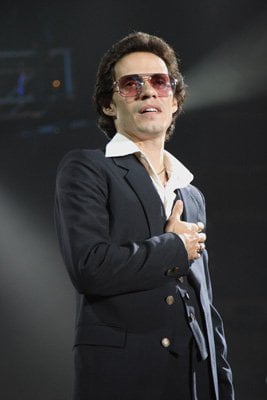 J-Lo Back in Bittersweet Bio-Pic about Seventies Salsa Singer

At the age of 17, Hector Juan Perez Martinez (1946-1993) dropped out of high school and emigrated to the U.S. from Ponce, Puerto Rico in pursuit of the American Dream. Upon his arrival in New York City, the aspiring singer was disappointed to see that the streets of Spanish Harlem were simply paved with asphalt instead of gold. Since the barrio failed to measure up to his expectations, he decided to move in with his sister, Priscilla (Romi Dias), who had an apartment in the Bronx.

Because he was blessed with such a gifted voice, Hector was able to land a gig as the front man for a sextet within a week. But it would be for another four years before he would change his last name to Lavoe (aka “The Voice”) and collaborate with trombonist Willie Colon on some groundbreaking salsa albums for Johnny Pacheco’s new Latino record label, Fania Records.

The association would catapult them to superstardom in Nuyorican and Spanish-speaking circles, however, Hector was ill-prepared to handle his newfound status as an overnight sensation. Despite marrying Nilsa Rosado, the mother of one of his young sons, in 1969, he kept up his boozing and womanizing behind her back. 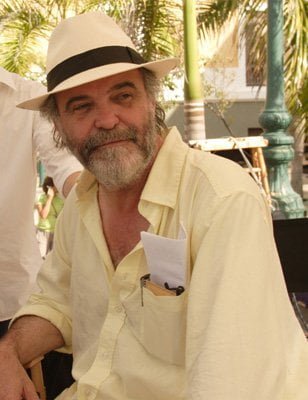 Worse, he began to shoot drugs intravenously which speeded the trajectory of his downfall. Ultimately, he became so unreliable, that Willie Colon abandoned the band and retired. It wasn’t long after the arrival of AIDS in the early Eighties, that Hector discovered that he was HIV-positive. Meanwhile, he went broke and his son was shot to death by a friend. So, it’s no surprise that he eventually attempted to commit suicide by leaping off a ninth floor terrace. What is shocking is that he even failed in that endeavor.

One would think that Hollywood would have a hard time successfully turning the life of such a loser into a romantic love story, but that’s exactly what we have with El Cantante, a bittersweet bio-pic starring Marc Antony as the ill-fated Salsa pioneer. Marc’s real-life wife, Jennifer Lopez, co-stars as Nilsa, though he only refers to her as Puchi, a nickname which might be a bad word in Espanol.

In fact, my only complaint about the film is that there were no subtitles accompanying about half the Spanish dialogue. As a result, I distinctly felt left out at those moments when the audience would laugh or otherwise react and I had no idea what had just been said. 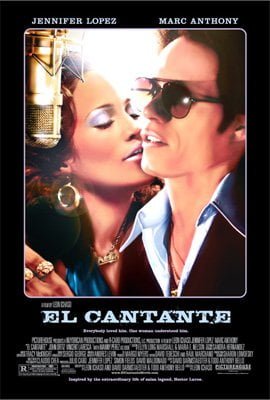 El Cantante flourishes because of the outstanding performances on the part of Lopez and Antony, who throw themselves into the roles wholeheartedly in what was obviously a labor of love. Plus, the picture achieves much more than simply chronicling Hector’s checkered career and shaky relationship with his cranky, coke-addicted spouse. For it simultaneously serves as a reminder of all the great Latin sounds created in the Seventies not just by Lavoe and Willie Colon, but by their equally-talented colleagues with names like Ray Baretto, Eddie Palmieri, Cheo Feliciano, Mongo Santamaria, Joe Bataan and Larry Harlow.

Certain to evoke a few tears from Fania fans with feelings of nostalgia for the bygone era.

Rated R for sexuality, drug use and pervasive profanity.

In Spanish and English, but only partially subtitled.