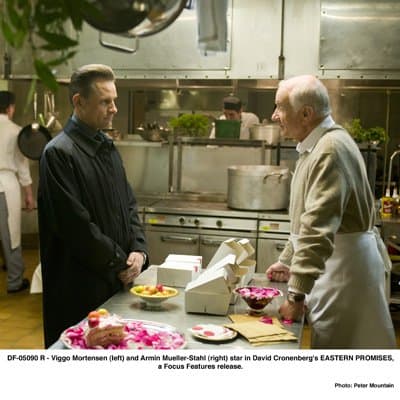 It’s Christmas season in London, and midwife Anna Khitrova (Naomi Watts) is living back at home with her with her mother (Sinead Cusack) after suffering a miscarriage and being unceremoniously abandoned by her doctor boyfriend. That ordeal helps explain why she subsequently becomes so deeply affected by the death during childbirth of her 14 year-old patient (Sarah-Jeanne Labrosse) who had staggered into the hospital alone and already in labor.

Learning that the young girl kept a diary, Anna surreptitiously pockets the journal with hopes of finding the otherwise orphaned baby’s father, in order to save the newborn from foster care or adoption. But because the entries are all written in Russian, she has to enlist the assistance of her still-fluent Uncle Stepan (Jerzy Skolimowski) for a translation. However, when he flatly declines, the still determined Good Samaritan decides to pursue the only lead she can decipher on her own, namely, a business card left stuck in the book.

The lead takes her to the trendy Trans-Siberian restaurant, an establishment run by a ruthless mobster named Semyon (Armin Mueller-Stahl) with the help of his enforcer son, Kirill (Victor Cassel), and Nikolai (Viggo Mortensen), a chauffeur skilled at cleaning clues off corpses. Unaware that the place is a front for a brutal crime family trafficking in contraband and sex slaves, Anna is naively duped by the proprietor’s affable overtures into leaving the incriminating diary with him for safekeeping. 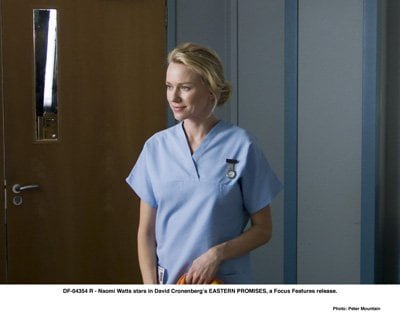 Consequently, it isn’t long before she finds herself on the run from goons intent on eliminating her and anyone else who might be able link the baby back to Semyon and his illicit operation. Lucky for her, there’s dissension in the ranks, with Kirill feeling his independence oats while Nikolai proves vulnerable to her womanly wiles.

So unfolds Eastern Promises, another primal splatter flick courtesy of David Cronenberg (A History of Violence) who has enjoyed mostly a cult following since the Seventies. Here, the perennial purveyor of offbeat horror fare works with a blockbuster budget which probably explains the considerable concessions made to mainstream Hollywood. Nonetheless, loyal fans are unlikely to be disappointed as many of the maverick director’s trademarks remain in evidence.

The movie might best be described as a relentlessly-haunting saga of Shakespearean proportions which reads superficially like a curious cross of The Transporter (2002) and Borat (2006), only overlaid with many of the generic elements of the gratuitously-gruesome gangster genre. Ala The Transporter, the film revolves around a modest antihero who constantly claims to be just a driver and who opts to turn the tables on an employer dabbling in white slavery. And like the latter, it’s overly laden with thick Russian accents and a memorable fight scene featuring full-frontal male nudity. 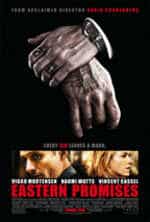 Exploring an array of themes ranging from love and betrayal to morality and mortality, Eastern Promises is a mesmerizing thriller designed for folks with a penchant for lingering depictions of utter depravity. Sheer brutality as cinematic beauty.