A paranoid political thriller that is somewhat more paranoid than political, Eagle Eye could be onto something when it considers that cell phones might be controlling you, rather than the other way around. Directed by D.J. Caruso (Disturbia), penned by no less than five writers, and executive produced by Steven Spielberg, Eagle Eye is a cyberspace cat and mouse caper where humans find themselves at the mercy of the hi-tech world they’ve created. And we’re not just talking about the shrill special effects hide and seek frenzy of this movie.

Eagle Eye begins at a US military control center, where the brass is hedging bets about conducting a fateful target assassination missile strike against what may or may not be a fake Afghan funeral, and with a most wanted insurgent possibly in attendance. And the bombing sets off a wave of retaliation against the US internationally, in its wake. 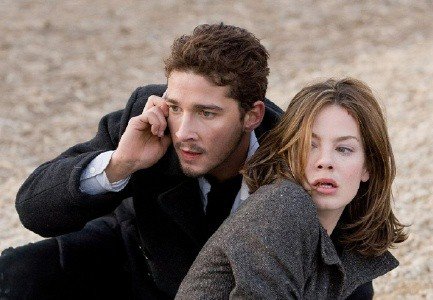 At the same time, bottom feeder Chicago copier clerk Jerry Shaw (Shia LaBeouf) receives word that his high achiever Air Force officer identical twin has just been killed in a car crash. When Shaw returns home, his bank account is suddenly overflowing with nearly a million bucks; the dive he lives in has filled up with boxes of explosive devices and weaponry seemingly out of nowhere; and the FBI breaks down his door and drags him off to jail after a strange female voice on the phone advises to him to high tail it out of there, like thirty seconds ago, all in quick succesion.

And on another side of town, single mom Rachel (Michelle Monaghan) gets demanding calls from the same mystery voice, ordering her to follow instructions or have her eight year old son die in an explosion aboard the train he’s riding. Eventually these two targeted victims of who knows what, are tossed together via the same bossy cell phone messages, to pay attention or die.

On the tail of these two clueless fugitives, is Billy Bob Thornton’s equally clueless but determined FBI agent. And as the panicky pair eludes massive police dragnets, they get lots of help from the Voice Lady, who shuts down assorted powers grids, while text messaging instructions for fleeing that show up in commandeered neon lights across the metropolis, to help them along the way.

At one point their getaway car is delivered by crane to a safe haven far from police in pursuit, and still later they’re dispatched to a mall to stop by Macy’s for Visa gift cards with coded messages, before heading over to Circuit City for further subversive cyberspace revelations. Eventually plot resolutions unfold on the top secret 36th floor harboring covert military designs, but not before a weary audiences has tagged along for far too long after car chases, explosions and dangerous devices hidden inside a trumpet.

And Thornton, who gets the best line in the movie, declares that ‘I’m not going down in history as the asshole who let this happen.’ Not sure he’s referring to the movie, but that might not have been a bad idea, considering. Eagle Eye, a wireless espionage romp where Frankenstein is a female.