Road movies have a lot of scope, with characters given the freedom to claim new lands as their own and fight off dragons that try to thwart their journey across the rugged terrain. But somehow all these opportunities get missed in the telling of Due Date which runs out of steam almost as soon as it begins and the countless failed attempts at crass humor only add to the malaise.

Peter Highman (Robert Downey Jr) is on a business trip in Texas and looking forward to the birth of his first child in one week’s time. His path crosses with one Ethan Tremblay (Zach Galifianakis), an aspiring actor, who gets them both put on the ‘no fly list’ and they are forced to make the trip back to L.A. together. 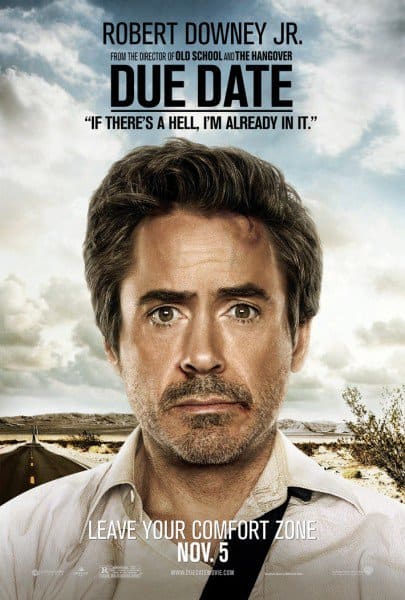 There are no great moments in this film but there are many dreadful ones, the most memorable of these being played by Downey’s character. This respectable architect has an impulsive streak which is taken to its nadir when an eight year old boy annoys him and Downey punches him hard in the stomach. A little later Downey spits in the face of Ethan’s harmless little dog and it’s difficult to imagine what the writer was trying to achieve. Zach, totally uncouth and self-serving, does nothing to raise the bar and we are left with two characters to whom we have no desire to relate.

Jamie Foxx makes a brief appearance but he is given little else to do other than make a few cups of coffee. The joke (I use this term loosely) is that he accidentally brews the coffee from the cremated remains of a departed relative which, incredibly, isn’t the silliest plotline in the film or even the most unbelievable. Apparently, if you steal a vehicle from the Mexico Border Police and zoom around US highways you are inconspicuous and if a US police car does show up you can lose them with some fancy driving as police vehicles in Arizona do not have radio contact.

So this is a Buddy Movie with one buddy who is psycho and the other a jerk which could be funny but, due to an inadequate script, isn’t. And I don’t know how many takes it took to wrap that spitting scene with Downey and the dog but I’m sure, by the end of filming, that must have been one ticked off pooch.

Written & Directed by Todd Philips (Director of The Hangover)