Everything has been coming up roses for Christine Brown (Alison Lohman) lately. Career-wise, the ambitious banker is one of two employees competing for a big promotion to assistant manager. Meanwhile, her love life is equally promising, since her boyfriend (Justin Long) who adores is secretly planning to pop the question soon.

However, this state of bliss starts to dissolve into a neverending nightmare the day a disheveled, senior citizen on a fixed income enters the branch office to ask for a third extension on her overdue mortgage payments. Ghastly Mrs. Ganush (Lorna Raver), who’s blind in one eye, takes out her false teeth and places them on Christine’s desk while awaiting word on the status of her application. 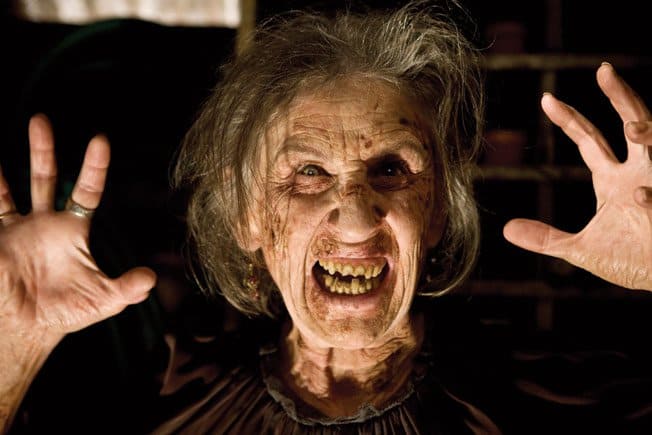 That gross behavior makes it easier for the disgusted loan officer to decide to foreclose on the house, especially because she wants to impress her eavesdropping boss, Mr. Jacks (David Paymer), with her toughness. Out of desperation, Mrs. Ganush swallows her pride and gets down on her knees to beg Christine to change her mind. But this overture is only met with a call to security to carry the disruptive customer out of the building bodily. Instead of driving away in her dilapidated jalopy, the humiliated Mrs. Ganush hides in the bank’s parking lot for Christine to level a chilling threat: “Soon, it will be you who comes begging to me!” Truer words were never spoken onscreen.

I’m not sure whether a horror flick has ever had a more timely theme, given the record number of sub-prime mortgages in default. So, I suspect some audience members might be rooting for the ghoulish Ganush as she endeavors to exact a measure of revenge. And then some.

Regardless of whether the premise was by coincidence or design, Drag Me to Hell is one of the best horror flicks released in recent years, right up there with two which made this critic’s Annual Top Ten List, What Lies Beneath (2000) and Dawn of the Dead (2004). Credit director/co-writer Sam Raimi of Spider-Man superhero fame who proves himself a master of suspense as well by crafting a spine-tingling adventure guaranteed to elicit blood-curdling screams and to make you jump out of your seat when you least expect it.

Taking a page out of Hitchcock, he accomplishes this feat without resorting to the gratuitous gore we see splattered across the screen in most of the scary genre’s recent offerings. But don’t be deceived by Drag Me to Hell’s deceptively-benign PG-13 rating. For this relentless shockfest is still not for the faint of heart, and is likely to leave youngsters as afraid of evicted, vindictive old ladies as they are of the dark.