If you were contemplating suicide, but couldn’t quite summon up the nerve to do yourself in, where would you turn for help? In the Internet Age, you might surf S&M chat rooms to find a sadist whose fetish corresponds with your masochistic tendencies.

That’s precisely the approach taken by Nancy Stockwell (Maria Bello), a clinically-depressed housewife who’s fed up with her lot in life after being stuck in an unsatisfying marriage for 15 years. It’s not that her emotionally-estranged husband, Albert (Rufus Sewell), has exactly been abusive or anything, unless mere neglect counts. He’s just been very busy, between the demands of his job and working on his golf game.

Lonely Nancy knows she has problems, which is why she informs her shrink (Amy Brenneman) about her compulsive urge to mutilate herself. During their intense sessions she speculates about what happens when you die, and she even takes bathroom breaks to slice her thighs with a razor blade. 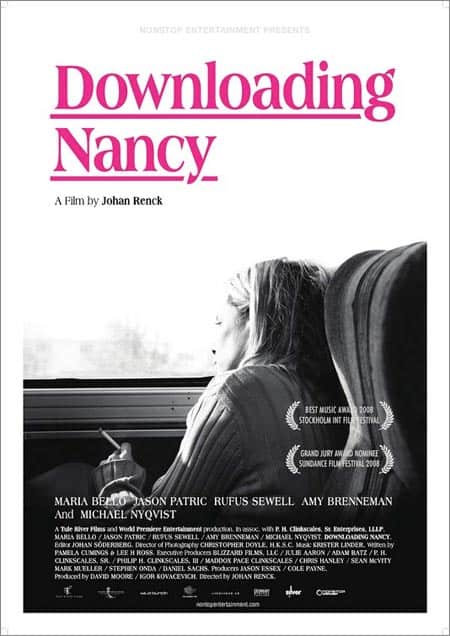 Although clueless Albert may be oblivious of his wife’s issues, Nancy’s lucky enough to make friends online with Louis Farley (Jason Patric), a sicko who goes by the screen name “Deep Hurt.” As his creepy moniker implies, he gets his jollies by inflicting pain. And after months of virtual foreplay on the computer, the two arrange to meet in person once Louis promises to put her out of her misery.

So, Nancy boards a bus for Baltimore, fully expecting to be shot by Deep Hurt as soon as she hands him her loaded pistol. But not so fast, kinky Kimosabe, since that wouldn’t be any fun for a sadist who never wants to give his prey what she wants. That wouldn’t really be torture, would it?

Raw and riveting from start to finish, Downloading Nancy marks the noteworthy directorial debut of Sweden’s Johan Renck. Despite its relentlessly-grim tone, this thoroughly-modern snuff flick warrants a watch for its intriguing premise alone. For the tawdry tale is based on an actual case which means a couple of lost souls must have met in a similar fashion in order to fulfill each other’s unusual fantasies.

In this case, however, remember that Nancy does have a husband, who finally gets suspicious a few days after his wife’s mysterious disappearance. He checks out her email and discovers a chat log that would make Chris Hanson and the folks at To Catch a Predator blush. Then, while he’s trying to track his wife down, Louis is having fun punishing her by making her doing stuff like walk barefoot across a floor filled with set mousetraps. Ouch!

And when she starts begging him for sex, the question quickly changes from “Will he murder her?” to “Can love blossom from a sordid scenario based on such bleak, unspeakable cruelty?”

Why not, so long as you have a couple of consenting adults. After all, no one knows what goes on behind closed doors. Except maybe Albert.