The Godfather’s Luca Brasi will be forever remembered as the mobster who sleeps with the fishes, but a mute Arab kid may be just as deserving of cinematic immortality for recovering from his condition after swimming with the dolphins. 17 year-old Morad had been left unable to speak after suffering a brutal beatdown for sending a text message to a classmate he had a crush on.

As Muslims, the young virgin’s overprotective siblings had rationalized the vicious attack in the name of protecting their sister’s honor. Fast forward a few months, and Morad’s doctors were on the verge of giving up on any hope of his emerging from his semi-vegetative state, when a shrink suggested an unorthodox, last ditch therapy just a couple days before the patient was slated to be committed to a mental institution. 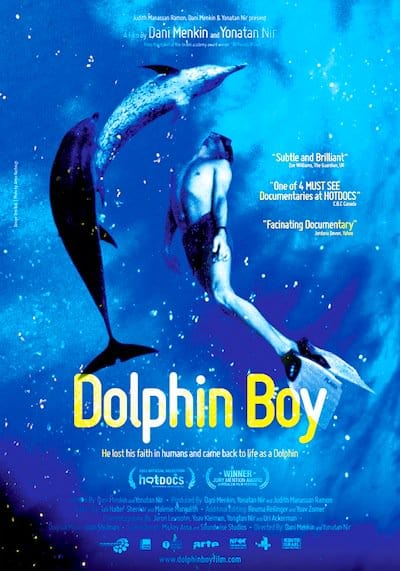 The experimental regimen called for him to report for rehab on the Red Sea in Eilat, Israel at a reef teeming with bottlenose dolphins. At first, Morad sort of moped around on the dock, but it wasn’t long before he got in the water where he was immediately befriended by a pod of people-loving cetaceans.

Nourished by the support, he miraculously recovered his ability to talk, although initially with no memory of the terrifying event that had crippled him. Instead, he coped by creating a whole new identity for himself as “Dolphin Boy.”

But what transpired on the night in question not only gradually came back, but his critical testimony in court helped put the perpetrators behind bars. So unfolds Dolphin Boy, a visually-captivating, feel-good documentary co-directed by Dani Menkin and Yonatan Nir that you just have to see believe.

An astonishing tale of cross-species bonding likely to leave you rethinking which animal is really man’s best friend.

In Hebrew and Arabic with subtitles